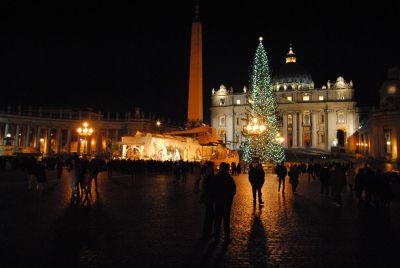 In 1982, under the pontificate of Pope John Paul II, the first Christmas tree was erected in Saint Peter’s Square initiating a new tradition in Vatican City. The tradition of putting up a tree during the Christmas season was historically celebrated in northern Europe and Poland, Pope John Paul II’s country of origin, but not in the Vatican until that year. Appropriately, the first Vatican Christmas tree came from Italy. Since then, the offering of a Christmas tree to the Pope has become an honor and each year the Vatican accepts a tree donated by a different European country or region. Germany, the Ukraine, Belgium, and Austria, among other countries, have all bequeathed a home-grown tree to Vatican City. The unveiling of the tree, along with a life-size nativity scene comprised of 17 life-size statues, takes place on Christmas Eve.

More in this category: « The Biggest Christmas Tree in the World, Gubbio, Umbria The Bridge That Didn't come Tumbling Down »