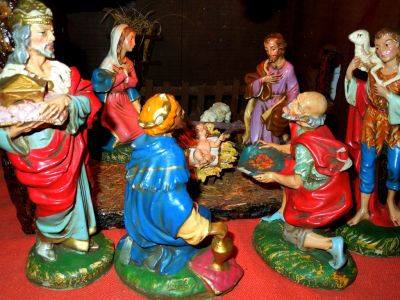 Art IS Italy! As one travels throughout its many regions, it is apparent that the arts have been and remain prominent in the Italian culture and way of life. The grand architectural masterpieces found all over Rome (fig. 1) are well known to most, with its innumerous treasures; not only seen in its many museums, but often also in little, mostly unknown sites.A few years ago I happened to stop by a small village at lunchtime, and ended up wandering into an old, rarely used church nearby.

A few years ago, I was able to spend Christmas visiting a small mountainous town in the Umbria region of Italy discovering a very different and quite simpler atmosphere as compared with larger cities; yet there were plenty of enjoyable and memorable moments to share.

The Church of St. Giuseppe (fig. 1) stood by the main square, dating back to medieval days with wonderful paintings and frescos inside (fig. #2). Several osteria were available (fig. 3), though open mostly at lunchtime or in the evening, serving pasta and grilled meats and sausages filling the air with aromatic flavors. Grocery stores (fig. 4) were also open to purchase a variety of local foods as most families would prefer to enjoy their holidays meals at home as we did. Later in the evening, it was wonderful to stroll about the square and the narrow alleys (fig. 5) as we looked for that warming after-dinner drink (fig. 6) before going to bed.

The next day we visited a tiny village nearby. Villa Colapietro (figs. 7,8) probably had no more than 30 people still living there, along with Silvio the donkey (fig. 9) and a few farms where chickens and sheep (fig. 10) roamed freely. Looking for presepe, the Nativity scene, was always particularly enjoyable, since many would be found not only around the many churches but often in store windows and other shops; often a family treasure (fig. 11) passed along to be preserved for future generations to admire and reminisce. Buon Natale!

More in this category: « Italy is Art Made in Italy »