The Biggest Christmas Tree in the World, Gubbio, Umbria 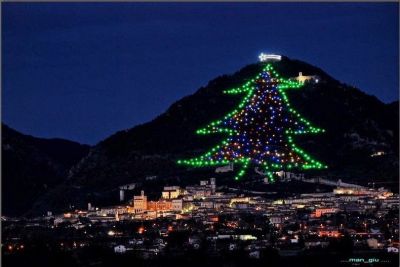 The Biggest Christmas Tree in the World, Gubbio, Umbria

This year marks the 36th anniversary of the Gubbio Christmas tree lighting. Since 1981, this wonderful Tree on Mount Ingino revives the small Umbrian town.

In the province of Perugia, Gubbio is a small town situated in the heart of Umbria. The city hosts artistic monuments, architectural heritage and numerous archaeological sites.

The first settlements in the territory date back to the Paleolithic period. In the Bronze Age, a primordial inhabited center developed on Mount Ingino. Over the years, Romans and Lombards, Guelphs and Ghibellines dominated the city. In the medieval period, the town was the target of many attacks by Perugia.
During the Renaissance, annexed to the Duchy of Urbino, Gubbio shone for magnificence and grandeur.

Along the romantic and intimate alleyways that wind through the city center you can admire churches and historical buildings of inestimable artistic value, such as the 14th century Palazzo dei Consoli that sits on a grandiose and wide square or the Palazzo Ducale, commissioned by Federico da Montefeltro around 1470 and completed under the guidance of his son Ubaldo. He also provided a splendid Studiolo similar to the more famous one that you can still admire in Urbino’s Palazzo Ducale. The Studiolo of Gubbio was dismantled and sold in 1939 at the Metropolitan Museum of New York.

The beautiful town is a destination for visitors, especially during Christmastime, when the magic atmosphere draws travelers to timeless places.

The famous Christmas tree entered into the Guinness Book of World Records in 1991. It has a base of 1,150 ft. and a height of 2,130 ft. The tree starts from the walls of the city and extends up to the Basilica of Sant'Ubaldo on top of the mountain.  More than 800 bulbs complete the star and color the huge tree’s shape and more than 5 miles of electrical cable supplies power.

Over the years, many famous personalities from all over the world have attended the Lighting Celebration that takes place on December 7: Pope Benedict XVI, 2011, the Italian Republic President Giorgio Napolitano, 2012, Pope Francesco, 2014. This year, the famous Save the Children association will preside at the magical ceremony.

The installation began on September 4 of this year and required countless volunteers, alberaioli. The design is presided over by a committee with ages ranging from 21 to over 80-years-old; a demonstration of how the various generations are united by the dedication to the enhancement of our beloved Italy.

More in this category: « Must-See Art in the Vatican Vatican Christmas Tree »