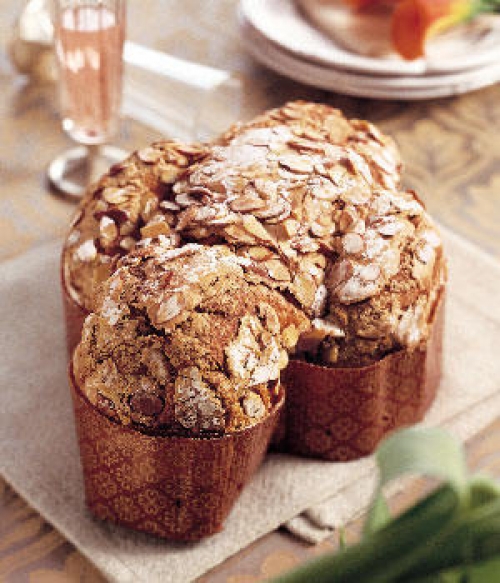 Easter always falls on the first Sunday after the first full moon of spring, as decided at the Council of Nicaea in 325 A.D. In Italy Easter is first a religious celebration but it is also celebrated with traditional Easter foods. These can vary from region to region although some are mainstays and can be found all over Italy during Easter.

In Italy it is almost mandatory to have agnello or lamb as the main course for the Easter meal, and depending on the region, it can be served in various ways. In Abruzzo agnello cacio e uovo is cooked in an egg, pepper and cheese sauce. In the region of Lazio and southern Italy, the lamb is usually roasted simply with rosemary, red wine and garlic. Down in the "heel" of Italy, in Puglia, roasted lamb is prepared for Easter but in the town of Bari, you will likely find verdetto, a type of lamb stew made with green vegetables like peas or fresh asparagus.

In Sardinia and some places in Campania the Easter meal may consist of goat instead of lamb. In fact, in the small town of Nereto, in the region of Abruzzo, Capra alla Neretese is the main Easter course as a regional specialty.

Ciambellone is somewhere between a bread and a cake due to its sweetness. This ring shaped cake has a distinct flavor that comes from the zest of lemons and originally was created as a harvest celebration. Italy selected the ciambellone as one of the two most famous cakes, the other being tiramisu, and sent them to the 50th birthday celebration of the Treaty of Rome in 2007.

In the northern region of Friuli with its Austrian and Slavic influences, the sweet gubana bread is a part of the Easter table. This bread is made with several types of nuts, raisins, apricot marmalade, cocoa, candied orange peel, wine and/or grappa. It is often served as a dessert.

This traditional Easter soup made with beef, veal, pork, kale and herbs and is especially popular in Naples and is eaten at the beginning of the Easter meal.

This traditional side dish is served in Italian homes for Easter. This dish consists of sautéed artichokes mixed with potatoes. Throughout Italy and especially in Rome, artichokes are part of the traditional Easter meal. Since spring is the season of harvesting the artichokes, many cities and towns in Italy celebrate this with their own artichoke festivals.

These rice filled fried balls are a specialty in Sicily and frequently are included as appetizers or part of lunch during the Easter season. Not typically found in restaurants, arancini are best when homemade by your nonna, your mama or your zia.

This Easter pie that takes on a quiche form is made with puff pastry dough and is stuffed ricotta cheese and Swiss chard or spinach. This is very popular throughout Liguria for Easter meals.

The word "sciusceddu" is Sicilian dialect. There are actually two theories for where the word comes from. It is possible it derives from the Latin word "juscelleum," meaning soup or from the Sicilian dialect verb "sciusciare," meaning to blow. Either way, this ricotta meatball and egg soup is traditionally served as part of Easter dinner in Messina, Sicily.

Naturally in Italy there is no lack of dolci on any day especially on Easter. Traditional desserts for the Holy feast are the Cassata Siciliana, a sponge cake with ricotta filling; the colomba, a dove-shaped cake with candied fruit and almonds; and pasticiotti, little pastry tarts filled with custard.

Thanks to these savory and mouthwatering traditional dishes, the Italian heritage and culture is kept alive throughout the world. It is also testimony that the Italian cuisine continues to be the most celebrated and imitated.