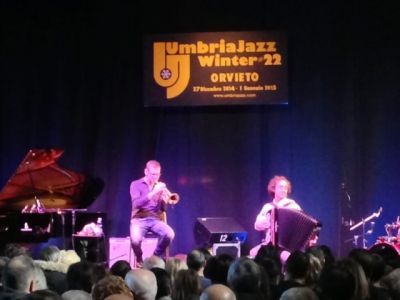 A late December freddo polare (polar cold), which for Italy means anything below freezing temperature, did not deter jazz appassionati from heading to the hill town gem Orvieto for the 22nd edition of Umbria Jazz Winter. Of Etruscan origin and perched on a tufo rock plateau, medieval Orvieto rocked for six days with 120 concerts performed by 160 musicians in the 14th century city hall, 18th century frescoed theater, former Franciscan monastery refectory, and even the stunning black-and-white-striped 13th century Duomo.

Those bundled up against the polar cold enthusiastically followed the brass band Funk Off; all the musicians in monogrammed black parkas, hats pulled down tight over the ears, gloved hands playing trumpets, clashing cymbals, banging the drums throughout the medieval alleyways from Palazzo del Popolo to the Duomo. There were many highlights of our two days at Umbria Jazz Winter. First, the jazz dinner in the former 14th century Franciscan monastery, now Ristorante San Francesco, where New Orleans jazz musician Patrick Williams and his band had the Italians up rocking between courses.

And the next day, a jazz lunch in the same spot where Cynthia Blant from New Orleans crooned the blues during lunch, signed autographs for fans after and posed for a photo with Pino, too. The Joe Lovano/Chris Potter saxophone duel in the vaulted Palazzo del Popolo was a winner, too, and, as at every venue, the enthusiasm of the Italian public was a large slice of the pleasure. The public went wild over another captivating performance in the medieval city hall: Fabrizio Bossi on the trumpet and Luciano Biondini on the accordion in a dramatic musical duel. In the splendid frescoed Teatro Mancinelli, Brazilian Omar Sosa turned the piano into a cacophonous voice responding to the blaring attacks of Sardinian Paolo Fresu’s trumpet. At other moments during their sell-out concert, the two instruments coddled each other in gentle harmony. One of our favorite concerts was The Four Vegas. These young Roman musicians who took off with Elvis revival music (singer Al wears his hair in pompadour style and pelvic twitches are in the act), now play everything from Otis Redding to the Beach Boys to Chuck Berry, peppering their act with playful conversation and bantering jokes that take the spectator from clapping and stomping to laughing. We first saw them at Umbria Jazz in Perugia, summer edition and we’re affirmed fans now.

Another favorite part of our days at Umbria Jazz Winter is our stay with widowed Signora Liliana, 85-years-old, who has welcomed us into her home for years now during the jazz festival. She has two grown children who let her rent a room to us, and only us, as most hotels and Bed & Breakfasts are sold out during the festival. As always, we had long chats over morning espresso about her past life as an orphaned daughter of poor farmers, her two children, her work as a seamstress. She told us with a smile, “My daughter wants me to set aside my work, telling me, ‘Mamma, we’ve only ever known you with a needle in your hands,’ but my work keeps my mind active and I love having people coming and going.” The morning we left, she had just made the pasta for lasagna for her New Year’s celebrations with friends.
As we left, we booked our room for next year’s Umbria Jazz Winter festival. After all, who can imagine being anywhere else at the end of December?

More in this category: « A "Special" Tony Bennett Zero Assoluto - A balanced and complimentary musical relationship »