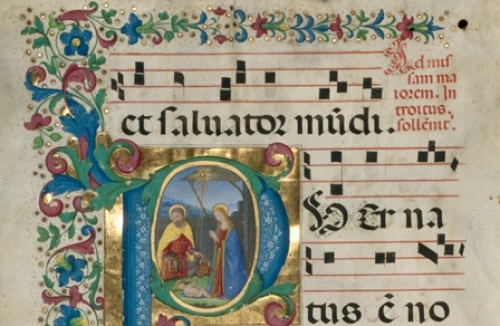 A variety of liturgical manuscripts were needed during the Middle Ages and the Renaissance for the celebration of the Mass and offices. These included missals, gospel lectionaries, choir psalters, breviaries, graduals, and antiphonaries. Without such books, the services could not take place nor the sacraments administered to the faithful. Of these, choral manuscripts were often the most spectacularly decorated. There existed a rhythm of observances both within the liturgical year and within the individual day. Choral books were usually produced as multi-volume sets in order to cover all of the feast days throughout the entire liturgical year. The two main types of choral books in the Renaissance were the gradual, which contained the musical parts of the Mass, and the antiphonary, which contained the music for the Daily Office (Matins, Lauds, Prime, Terce, Sext, Nones, Vespers, and Compline). All medieval churches were expected to have both a gradual and an antiphonary (always made in multiple volumes), and all monasteries were certain to own them.

An outstanding leaf from a Renaissance choral book now in the Cleveland Museum of Art provides the music for Christmas Mass. It features an illuminated Initial "P" depicting the Nativity and comes from a gradual dating to about 1500. The leaf was illuminated (or decorated) by the Florentine artist, Attavante degli Attavanti (1452-1520/25). The Latin text reads, "Puer natus e[st] nobis, et filius datus est nobis..." (For a child is born to us, and a son is given to us...). It represents the opening of the Introit for Christmas Day. "... and his name shall be called Wonderful," continues this text taken from Isaiah 9:6. It is used to celebrate one of the most joyous events of the Christian Church; the birth of Christ at the solemn high mass on Christmas Day. This splendid leaf contains the chants used for that particular Mass. The prominent initial "P" not only introduces that chant, but also features sprays of decorative foliage that emerge and migrate along three sides of the page. This beautiful initial was painted by one of the most prominent Florentine illuminators of the late fifteenth century, Attavante degli Attavanti, whose patrons included Duke Federigo da Montefeltro of Urbino, King Matthias Corvinus of Hungary and the Medici Pope Leo X. Characteristic of Attavante's style is the use of a bright, sunny palette. His miniatures often include detailed landscapes with receding vistas and sun-drenched hills, townscapes, and ultramarine skies. His figures are delineated with distinctive eyes and beards can occasionally assume the "heroic" look of Old Testament patriarchs. His youthful males can at times suggest the sculptures of Verrocchio, under whom he reputedly studied. Attavante had a large workshop in Florence and often collaborated with other illuminators on important projects. The border ornament is certainly the work of an assistant while Attavante, himself, painted the scene of the Nativity within the initial.

Choral books were usually made in large format in order to be placed on a lectern where they could be viewed simultaneously by the members of a choir. Given their large scale and prominent placement, they would have been highly visible within a church and therefore became symbols of the prestige and dignity of that church. Only the wealthiest ecclesiastical foundations could afford to commission the most lavishly decorated choral books, which were frequently decorated with large letters containing sacred figures or religious scenes, known as historiated initials. These illuminated initials not only illustrated liturgical feast days within their texts, but also served as visual aids that enabled the user to navigate through the volume. Though choral books were produced all over Europe, many of the finest and most richly decorated were often those produced in Italy during the Renaissance.

The technique of manuscript illumination is essentially the same as painting on panel. However, instead of wood panel, the texts, gold and paint in a manuscript were applied to parchment or animal skin, a very durable support. The illuminator began with a primer, followed by the laying down of the gilding and pigments. Initials and marginal decoration provided the book with a look of great luxury. Before the era of printing, the copying of a text by hand was a laborious, time-consuming and expensive process. The decoration of books also represented a substantial investment of time and resources. In fourteenth and fifteenth century Italy, panel painters were usually entrusted with commissions for illuminating books. Some of the most prestigious Italian painters of the epoch illuminated books in addition to painting frescoes or altarpieces in order to eke out a living. These included such artists as Lorenzo Monaco, Girolamo da Cremona, Stefano da Verona, Bartolomeo Caporali, and others. Major centers developed reputations for high quality book illumination such as Florence, Siena, Milan, Rome, Mantua, Perugia, and Ferrara.

Today, numerous Italian choral books, including detached leaves and fragments, are preserved in museums and libraries around the world, their parchment leaves and gold and silver illuminations as brilliant and fascinating to our eyes as they were centuries ago to Renaissance men and women. Many are artistic masterpieces and works of great historical importance such as the leaf for solemn high Mass on Christmas day painted by Attavante. It is not known for which church this choral book was intended, however, its beauty still speaks to our eyes. Our imagination can almost hear the chants of the choir on that joyful Christmas morning.

Leaf Excised from a Gradual: Historiated Initial P with the Nativity, about 1500

Ink, tempera and gold on parchment