The Splendor of the Doge 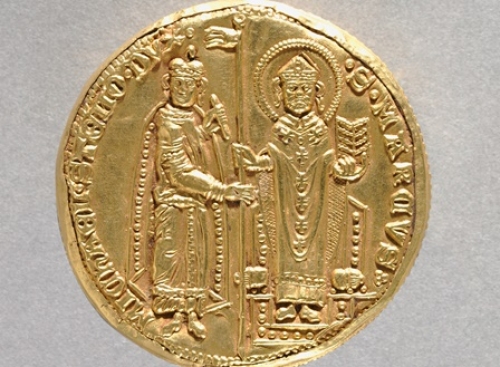 The Splendor of the Doge

Venice, one of the most beautiful and exotic of Italian cities, is renowned for its geographical setting, its architecture and the many important works of art housed within its churches and palaces. With its canals and bridges, Venice possesses a unique and quiet beauty that is memorable to all who visit. The Republic of Venice was a major maritime power during the Middle Ages and Renaissance, as well as a very important center of commerce, especially silk, grain, and spice. One of her great export products was glass.

Situated on the Adriatic Sea, Venice always traded extensively with the Byzantine Empire and the Muslim world. By the late 13th century, Venice was the most prosperous city in all of Europe. At the peak of its power and wealth, it had 36,000 sailors operating 3,300 ships, dominating Mediterranean commerce. Venice's leading families vied with each other to build the grandest palaces and support the work of the greatest and most talented artists. The city was governed by the Great Council, which was made up of members of the noble families of Venice. The Great Council appointed all public officials and elected a Senate of 200 to 300 individuals. Since this group was too large for efficient administration, a Council of Ten (also called the Ducal Council or the Signoria), controlled much of the administration of the city. One member of the great council was elected "Doge," or duke, the chief executive, who usually held the title until his death.

Within the collection of the Cleveland Museum of Art, a small object will be found: the golden seal of Doge Michele Steno (1331-1413). He was elected in 1400 and served as the Venetian Republic's 63rd doge until his death. Steno was known to be a skillful diplomat who enjoyed dressing elegantly in the style of a Byzantine emperor. He was also fond of impressive ceremonies and processions which signified his rank and authority. The Venetian doge normally took part in many ducal processions throughout the year, which started in the Piazza San Marco. The doge would appear in the center of the procession, preceded by civil servants ranked in ascending order of prestige and followed by noble magistrates ranked in descending order of status. From the 14th century onwards, the ceremonial crown and well-known symbol of the doge of Venice was called corno ducale, a unique kind of a ducal hat. It was a stiff horn-like bonnet, which was made of gemmed brocade or cloth-of-gold and worn over the camauro, a fine linen cap with a structured peak. Every Easter Monday, the doge headed a procession from San Marco to the Convent of San Zaccaria where the abbess presented him a new camauro crafted by the nuns. During Steno's reign, Venice continued to prosper and even expanded its territories. By his death, Michele Steno was a very wealthy man. He was buried in the Basilica of San Giovanni e Paolo, which was the favored burial place of Venice's higher nobility. Until the 15th century, the funeral service for a deceased doge would normally be held at St. Mark's Basilica, where some early holders of this office are also buried. After the 15th century, however, the funerals of all later doges were held at the Basilica di San Giovanni e Paolo, and 25 doges are buried there.

Steno's seal in the Cleveland Museum of Art is fashioned from thin sheets of gold over a wax and resin core. It measures slightly less than two inches in diameter, but is a superb example of the sigillographic arts. On its obverse (front face) is depicted the doge himself accepting his gonfalone or banner, a symbol of rank, from St. Mark. This also illustrates the sanctity of the office of doge under the patronage of St. Mark. The Apostle Mark is the patron saint of Venice and his relics are preserved and sanctified in the basilica that bears his name. On the seal, a surrounding Latin inscription reads "Michaeli Steno, Doge / Saint Mark." Another inscription on the reverse reads "Michaeli Steno by the Grace of God Doge of the Venetians." The figures on the front are beautifully rendered with great attention to the details of costume clearly inspired by the pearl encrusted robes worn by the Byzantine emperors. The quality of the workmanship indicates that the artist was likely a highly skilled goldsmith. The design of the seal follows that of the Venetian ducat, the primary gold or silver coinage used in Venice since the Middle Ages. These coins represented the doge together with St. Mark in a similar fashion to that of the seal. So stable was the Venetian Republic during the15th century that international traders in Western Europe shifted from the florin of Florence to the Venetian ducat as their preferred currency for international trade. As rulers across Europe reformed their own currencies, they most frequently used the ducat as a model.

The seals on highly important documents sent between kings, ambassadors or from the pope to the doge were treated with great circumspection and to protect and preserve them, the wax impression together with the silk cord in the heraldic colors of the donor were encased in gold. Michele Steno's golden bulla is beautifully preserved and is a true work of art. This golden bulla is described as having once been attached to a privilege given by Steno to the Venetian consul in Messina, Fridericus Spatafora, and his descendants on May 12, 1409. The seal and the document, at some point in history, became separated. The document to which this gold bulla was attached is now preserved in the Archivio Nazionale in Palermo.