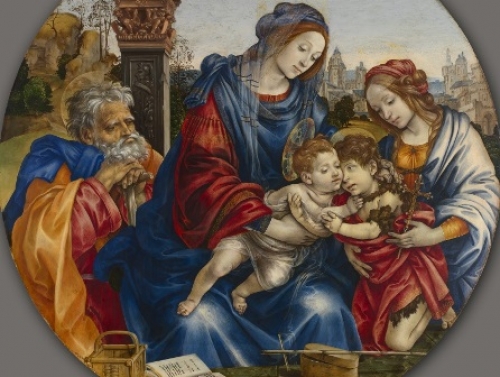 Within the collections of the Cleveland Museum of Art will be found one of Fillipino Lippi's great works representing "The Holy Family with Saint John the Baptist and Saint Margaret." Lippi's sophisticated composition overlaps five figures in a round format known as tondo. The perfectly round form became popular for painting during the 1440s and was commonly used for domestic settings such as a private home or palace, or perhaps a guild, instead of a church. These circular format paintings challenged the artist to create a harmonious, balanced composition within this more difficult shape. The painting is known to have been commissioned by the Cardinal of Naples, Oliviero Carafa. Lippi would have painted it in Rome around 1495 while working for the cardinal's family. There, it would have provided an example of the widespread taste for Florentine art, then wildly popular across Italy.

Filippino Lippi was among the most gifted and accomplished Florentine painters and draftsmen of the second half of the 15th century. He was born around 1457, the product of a famous and illicit relationship between the painter Fra Filippo Lippi and the young nun Lucrezia Buti. Trained first by his father, also an acclaimed painter, he entered the workshop of Sandro Botticelli in 1472, three years after his father's death. He went out on his own a few years later, having developed a manner that was deeply imbued with the influence of his two great masters. Filippino's first major project was the completion of the fresco cycle begun by Masaccio and Masolino in the Brancacci Chapel, Santa Maria del Carmine, Florence, which had remained unfinished for more than half a century. Here Filippino adjusted his style to allow his contribution to seamlessly mesh with Masaccio's more monumental manner.

During his early career, Filippino made numerous drawings in metalpoint and white gouache on prepared paper. Although the technique was common in Florence in the 15th century, Filippino employed it with an unusual degree of assurance and freedom. In the mid-1480s, Filippino produced the painting of the "Virgin and Child" in the Metropolitan Museum in New York and his greatest panel painting, the "Vision of Saint Bernard," now in the Florentine Badia. In both, the artist combines a reflective and poetic interpretation of his subjects with warm colors, a new subtlety of chiaroscuro, and an almost northern European interest in genre detail and landscape.

Soon thereafter, he was commissioned by Filippo Strozzi to paint his chapel in the Church of Santa Maria Novella, Florence (1488), but, a year later, Filippino had moved to Rome, where he produced numerous studies after Roman antiquities. It was during this period that he painted his tondo, now in Cleveland. His major project in Rome was the series of frescoes in the Chapel of Cardinal Carafa in Santa Maria sopra Minerva, commissioned in 1488 but not completed until five years later. His work there contains a new animation of form and a lively, personal interpretation of the antique vocabulary that he gained on his Roman visit.

The Cleveland tondo is a large painting measuring five feet in diameter. It reveals meticulously detailed still-life elements on the parapet full of symbolic meaning, and reflects Lippi's interest in northern European painting that he would have seen in Florence where German and Netherlandish painters frequently visited. Likewise, the classical architecture, a reference to the pagan world cast off by Christianity, demonstrates his intense engagement with ancient art and architecture in Rome. Embellished with learned references and made with expensive materials, this painting would have actively inspired religious meditation and demonstrated the patron's courtly, civilized taste.

Cardinal Oliviero Carafa (1430-1511) was related to Giovanni Pietro Carafa, who became Pope Paul IV. Like the majority of his era's prelates, Oliviero Carafa displayed the lavish and conspicuous standard of living that was expected of a prince of the Church. He was born in Naples and elevated to archbishop at the age of 28. Pope Paul II made him a cardinal in 1467 at the age of 37, and Pope Sixtus IV appointed him legate to King Ferdinand of Naples in 1471. Carafa was also named by Sixtus admiral of the papal fleet, which captured Smyrna from the Ottoman Turks under his command. Carafa thus gained the reputation of an able military leader and the respect of Sixtus IV, and with the ascension of his career, Carafa became a wealthy prelate.

In Naples, Carafa funded the richly decorated crypt of the cathedral, designed to contain the relics of Saint Januarius in a sufficiently magnificent manner that it could also serve as his own mortuary chapel. Carafa was an intellectual patron of Renaissance humanists and assembled a great library that was consulted by scholars. When Bramante arrived in Rome, his first architectural commission came from Carafa, the cloister at Santa Maria della Pace.

This subject of the Cleveland tondo, "The Holy Family with Saint John the Baptist and Saint Margaret," addresses a central theme of the Italian Renaissance, the divine motherhood. It is one of the most recurrent themes of Christian art from the period. The manner of representing the Madonna by Renaissance artists reflects the role given to her by the Church as one predestined, through the Incarnation, to bring about the redemption of man. Like a number of other themes dealing with the lives of Christ and the Virgin, the Holy Family gained importance at the end of the Middle Ages as an inspiration to popular piety through contemplation of the emotional aspects of the Gospel story. It was most frequently depicted in painting and, especially in the Renaissance, was a favorite subject. It was Pope Sixtus IV, the patron of Cardinal Carafa, who sanctioned the Immaculate Conception as a church feast day. Carafa, no doubt, chose the particular grouping of these figures to reinforce the special role of the Virgin in the Redemption and perhaps also as a gesture to his special relationship with Sixtus IV. After the Virgin herself, John the Baptist was considered the closest intercessor for humankind. The inclusion of St. Margaret in this painting would be unusual for the time. However, Margaret was the patron saint of women in childbirth, and her name was frequently invoked by women in labor so that they may safely deliver their child. Together, these figures would have collectively suggested to the viewer the sanctity of the Holy Family, the Virgin's role in the Incarnation and Redemption, and devotion to two important saints whose intercession reinforces the Christian family.

It is not known where Cardinal Carafa displayed his painting. It was very likely in one of his palaces or personal residences. We can be certain that the Cardinal himself selected the theme and the subject of the painting. After several years spent mostly in Rome, Filippino returned to Florence in 1493, where he remained until his death. This beautiful and important painting tells many stories across the centuries, and it remains today an important link to a gifted Renaissance painter and the artistic taste and piety of an Italian cardinal.

The Holy Family with Saint John the Baptist and Saint Margaret, about 1495

Tweet
More in this category: « The Power of Relics Italian Americans and World War I »