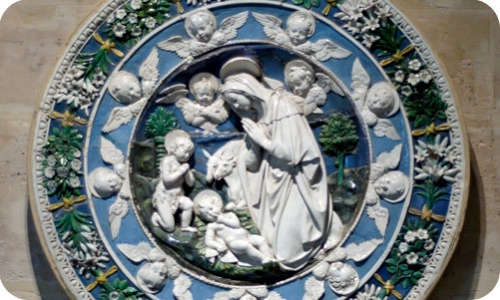 The beautiful wreaths, topiaries and garlands adorned with clusters of seasonal fruits, vegetables, berries, pods, leaves and other natural materials are named after the Della Robbia family of Florence.

The family of artists started with Luca della Robbia, born circa 1400, who -- at the urging of his father -- trained as a goldsmith, but later became a sculptor of bronze and marble. In 1431, he began work on a marble cantoria, a choir gallery, above the door to the new sacristy in the Duomo of Florence (now Museo dell'Opera del Duomo). Four front panels, two side panels and four panels between the columns supporting the gallery were carved into reliefs of children singing, dancing and playing instruments. The images were based on the verses in Psalm 150.

It took six years for Della Robbia to complete the cantoria, and the length of the project and amount of pay is said to have had an influence on his choice of a different sculpting material -- terra cotta. Among the great artists of the Renaissance, both Filippo Brunelleschi and Donatello were sculpting in terra cotta, but the clay was fragile and very susceptible to weather.

Adapting the medieval technique of applying a tin oxide glaze over clay -- for pottery known as maiolica, majolica, faience, and delftware -- Della Robbia developed a method for mixing the white opaque glaze with other powered metals to produce brilliant colors and a durable surface. The glazes were painted onto the terra cotta (which may have been fired once) and fired. Some sources note that a clear glaze may have been fired over the colors to create the luminous finish that glowed, even in dimly lit interiors.

The glazing technique was a closely guarded family secret, passed on to Luca's nephew, Andrea della Robbia (1435-1525). Many of the round pieces that Della Robbia sculpted were neatly bordered with seasonal vegetation -- flowers, leaves, berries, fruits and pods. Andrea's style included more details, and elaborate, colorful borders frame his sculptures. Andrea's three sons kept the Della Robbia school in operation until the mid-1600s.

When the pilgrims arrived in America in 1620, Christmas was not celebrated, and from 1659 to 1681, a law was passed that banned Christmas in the Massachusetts colony. While Christmas was not acknowledged in New England, it was a popular holiday in the South. In the early 1800s, the Dutch brought Sinter Klaas to New York; and on December 23, 1823, a paper in Troy, New York printed Account of a Visit from St. Nicholas, the popular poem more commonly known as Twas the Night Before Christmas.

By the late 1830s, several southern states had declared Christmas a holiday. The Charles Dickens classic, A Christmas Carol, published in 1843, popularized both the concept of Christmas as a family holiday and the use of "Merry Christmas." Christmas became a federal holiday in 1870, and the image of Santa Claus, created by Thomas Nast in 1863, had already developed as the standard in the United States. Decorating for Christmas was becoming popular, first with ornaments imported from Europe and then with American made products. However, while trees were decorated, wreaths and garlands were left plain.

The New York Sun made Santa Claus even more notable when it answered a letter with the famous reply, "Yes, Virginia, there is a Santa Claus;" and large retail companies starting using Santa Claus and other symbols of Christmas in their annual holiday promotions and advertising. Still, word did not travel as quickly as it does today, and while the holiday was widely celebrated, home decorations were kept to a minimum.

In 1926, an article in House Beautiful featured photographs of holiday wreaths decorated with fruits and stated, "This idea was undoubtedly suggested by the gorgeous Italian carvings and terra cottas of the Renaissanceâ¦" Then, the magazine had a more upscale readership of families with servants and country homes, so most of the general population were not aware of this decorating trend; and with the onset of the Great Depression, decorating for Christmas was not a priority.

Janice Therese Mancuso is the author of Con Amore, a culinary novel; and founder of Thirty-One Days of Italians, an educational program to promote Italian and Italian American history, culture, and heritage. For more information, visit http://home.earthlink.net/~31italians, www.jtmancuso.com, or email at This email address is being protected from spambots. You need JavaScript enabled to view it..

More in this category: « The First Christmas I Grandi Matrimoni, Southern Italian Style »