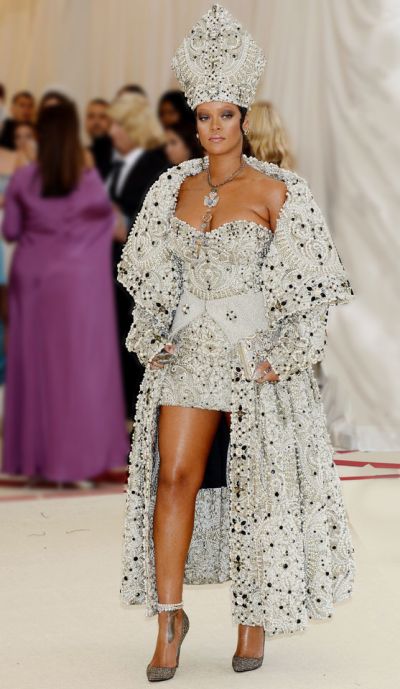 On May 7, the Metropolitan Museum of Art’s Costume Institute in NYC held their annual Met Gala – the most prestigious fashion event of the year. Widely regarded as one of the most exclusive social events in New York and one of the biggest fund-raising nights in the city, its exclusive guest list is filled with “IT” models, designers and industry big-hitters, all personally approved by Vogue Editor-in-Chef Anna Wintour. As a chair of the event since 1995 (excluding 1996 and 1998), Wintour oversees both the benefit committee and the guest list. Wintour chose quite the trio of fashion icons to serve as her co-hosts this year: Amal Clooney, Rihanna and Donatella Versace.

Each year the event has a theme and includes a cocktail hour and a formal dinner. The famed red carpet happens during the cocktail hour with guests attempting to dress to uphold the theme each year. With a hefty ticket price of around $30,000 per seat or about $275,000 for a table, the gala marks the grand opening of the museum’s annual fashion exhibit. While the entire point of the gala is to raise funds for the Met’s Costume Institute (it consistently reaps eight-figure sums annually) it’s the attendees’ outfits which take center-stage. This year’s theme and fashion exhibit is “Heavenly Bodies: Fashion and the Catholic Imagination.” The exhibit displays an interweaving of fashion and Roman Catholicism.

Although some found the gala’s theme controversial, the event was essentially sponsored and endorsed by the leaders of the Catholic Church. In fact, the Vatican lent around 40 ecclesiastical works to the Met for the exhibit. Items including papal rings and crowns worn by various popes from the 18th and 19th centuries are on display as well as precious treasures from the famous Sistine Chapel “never seen outside of the Vatican,” organizers said. Alongside the aforementioned donation from the Vatican, several Catholic priests even attended the gala as honored guests. “Heavenly Bodies: Fashion and the Catholic Imagination” celebrates the Catholic aesthetic and will be open to the public until October 8, 2018.

Tweet
More in this category: « A vintage musical artist who spins familiar modern tales Massimo Priviero From the Italian American Press - My Caruso »