From the Italian American Press - My Caruso 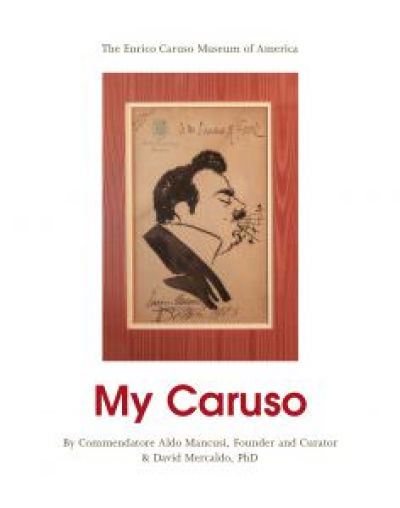 For 17 years, from his first performance on November 23, 1903 to his last on December 24, 1920, Enrico Caruso sang in 863 performances at the Metropolitan Opera House in NYC. Shortly after his first Met appearance, he began recording songs. Those recordings and his live performances spread the voice of Caruso around the world.

Throughout the years that Caruso sang, his life was chronicled through the songs he recorded, the people he knew, opera programs, news articles, family photos, books, written correspondence, personal items, and the “busts, commemorative plaques, caricatures, paintings, and dozens of items produced after his passing.” Aldo Mancusi is “the humble guardian of his memorabilia” and “My Caruso” highlights Aldo’s acquisitions, all on exhibit in the Enrico Caruso Museum of America.

When Aldo was a child, he would listen to Caruso sing; the voice carried from the records in his father’s collection. Each record purchased took several months of savings, but for Everisto Mancusi – who immigrated from Sarno (region of Campania) to Brooklyn, NY – Aldo writes, “Perhaps the lyrics of the operas in his native tongue brought him back to his beloved Italy where opera was a staple …”

Those recordings were the beginning of Aldo’s admiration and respect for Caruso and as Aldo became a successful businessman, he indulged in “buying a Caruso item here and there.” Eventually, his collection “amounted to several hundred items” and was first stored in the basement of his Brooklyn brownstone. As it continued to grow, it moved to the second floor. Now, “thousands of items – some rare, some common, and some one of a kind” – are in the museum which also houses a small theater, “with the seats gathered from the old Loew’s 46th Street Theater in Brooklyn.”

“My Caruso” starts with a foreword by David Mercaldo, PhD, who describes the importance of authenticity and writes, “Equally important, along with rare and authentic mementoes, are the sacred oral traditions the author has been privileged to bridge from a direct line of individuals dating back to their own relationships and social interactions with Caruso.” The “oral tradition lineage” connects “to Caruso through the written and spoken testimony of Marziale Sisca and his son Michael.”

In 1892, Marziale Sisca and his brother, Alessandro, founded “La Follia di New York,” a newspaper for the thousands of Italian immigrants living there. Shortly after Caruso first arrived in New York, a chance meeting with Marziale – backstage at the Met – led to an appointment for lunch. At lunch, Marziale asked Caruso for a picture to put in the paper. Caruso, instead, sketched a self-portrait and gave it to Marziale with a promise to provide a caricature “of some famous person in the field of opera or the musical arts” for the paper each week. This is one of the oral traditions mentioned in the foreword of “My Caruso” and is verified by the original book of sketches by Caruso at the Museum.

Aldo and Michael Sisca shared their appreciation of Caruso through numerous meetings and conversations and Aldo dedicated the book “To the memory of my mentor Michael Sisca who helped in so many ways, donating his and his father’s collection to the Enrico Caruso Museum of America.”

“My Caruso” is not only an “unveiling of treasures that are only found in the Museum on 19th St. in Brooklyn, New York,” but also a collection of treasures in the stories detailing Caruso’s life and his benevolence. The two gold pocket watches he gave to Father Tonello, the gold coins “custom designed by Tiffany & Co” he gave to the staff at the Met and the Caruso-branded products (with no royalties) are just a few examples of his generosity. The picture on the cover of the book is a self-portrait by Caruso given to a Boston newspaper. The last section of “My Caruso” is the Gallery, featuring some of the items exhibited in the Museum: Caruso’s personal possessions, photographs, letters he wrote, and articles and pictures after his death in 1921.

“My Caruso” offers an intimate look into the life of the world acclaimed tenor and brings the reader back to an era when “Enrico Caruso changed the world of Opera, not with elaborate costuming, theatrics or lighting. He did it with his voice!”

Tweet
More in this category: « Heavenly Bodies: Fashion and the Catholic Imagination Statuto - Defiantly devoted to preserving a unique and classic subculture »