The Symbolic Frescoes of Spello 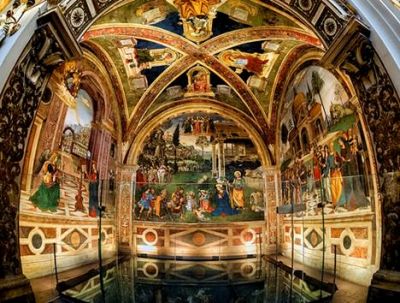 The Church of Santa Maria Maggiore in Spello, an ancient Umbrian commune in the province of Perugia, is a beautiful sacred site. The marble Roman columns to the left of the church’s entry and at the base of the bell tower immediately draw one’s attention. The columns certainly came from an important Roman building, though perhaps not the Roman temple dedicated to the goddesses Vesta and Juno which was once on the church site.

Archaeologists are uncertain about the date of the transformation of temple site to church site although 13th century documents confirm a church here. Towards the end of the Middle Ages, there were just over 2,000 inhabitants (about 8,000 today) in this walled village of Spello and roughly 100 churches, 22 dedicated to Mary (under just as many names).

This one, on Via Cavour the principal road of Spello tracing the main Roman road of Hispellum, must have been the most important and the most splendid; confirmed by its name. Santa Maria Maggiore was dedicated to the Virgin and to two specific episodes of her life: her birth, September 8, and Assumption into Heaven, August 15. Her image is over the door, a Baroque restoration of the medieval building.

Fortunately, when the church was restored in the 17th century, the chapel inside dedicated to episodes in the life of the Virgin was left untouched. Trolio Baglione, priore and later bishop of Perugia, had commissioned Pinturicchio, Renaissance master from Perugia, to fresco their Cappella Baglioni – now also known as ”La Cappella Bella” (“The Beautiful Chapel”).

Pinturicchio, or Bernardino di Betto, may have been a small man, indicated by his nickname “little painter,” but his artistic skills were grand. As you enter this side chapel, you see the fresco of the Nativity backdropped by the Umbrian countryside and Lake Trasimeno where fishermen drop their nets into the lake from their boats. This masterpiece is rich in minute details. Since 1501, many have admired the various symbols represented in the frescoes such as a peacock on the roof symbolizing the incorruptibility of the flesh and everlasting life and the crossed roof tiles on the stall foreshadowing Christ’s Crucifixion.

In another fresco near the Nativity, Pinturicchio’s splendid Annunciation scene is backdropped by an Umbrian landscape as well. Out the elegant room with the marble red, green and white floor, symbolic in its own right, past the wicker fence and through the arch, a countryside banquet is taking place along a road leading up to a fortified town. Pinturicchio’s self-portrait hangs on the wall behind the Virgin and a shelf above his portrait holds objects, each bearing significant symbolism as do the objects dangling below the portrait. Pinturicchio signed this fresco cycle in two places and included his self-portrait at least three times. There is no mistaking who the artist is.

He painted himself into the scene of the fresco depicting the young Christ disputing with the elders in the temple. Pinturicchio also included the portrait of Trolio Baglioni who commissioned the work. Dressed in the black habit of the canonico (priest associated with a cathedral), Baglioni appears to the left of his chamberlain with downcast eyes, dressed in blue and holding a bulging pouch of money. Perhaps Baglioni was letting us know that he can well afford Pinturicchio?

This episode of Christ’s childhood was actually set in the temple. However, this fully Renaissance painting, emulating classical architecture, depicts the Christ child in front of a domed Renaissance church, not a temple, and classical deities, the goddesses Minerva and Abundantia (Abundance), stand in the niches rather than saints. This scene, too, is rich in symbolism. For, after all, works of art were didactic as much as decorative from Roman times through the Baroque period.

For more information on interpreting the symbolism and sharing stories and local legends linked to these splendid frescoes and more, join me on my regular Zoom calls at www.annesitaly.com/virtual-experiences.