The Vera da Pozzo in Venice 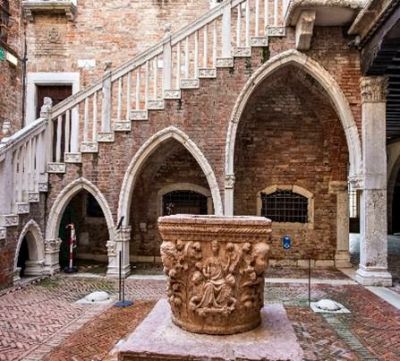 Away from the tourist sites in Venice, one finds the neighborhoods where locals work, shop and raise their families. Roam the calle that lead you to a campi or corti where children play and seniors sit and chat with their neighbors. Often the route is punctuated by the remaining pozzi that were engineered to supply clean water to the residents of Venice.

Varying in size and design, the pozzi could showcase a striking design, but more often it was simple with artistic carvings adorning the sides of the wellhead. The pozzi were and still are a piece of art.

Turning a corner or finding yourself at a dead end, you may be rewarded with a unique design on the local well or one repurposed by the locals as a mini garden. An area near the base of the wellhead often included a stone basin designed so that animals might drink here and not contaminate the well water.

The gastaldo (block leader) and the local priest had the keys to the well cover and would lock and unlock the well twice a day, morning and evening, with the ringing of the church bells. One of the many jobs for the women in the household was to carry buckets of water home for cooking, drinking and washing.

At times when there was insufficient water in the wells, water was brought in by boat from the mainland. Bigolanti were assigned to take water around to the neighborhoods, another job performed by women.

According to Veninezia Authentica, originally there were public and private wells and wells sponsored by the church. “An 1858 report by the Comune di Venezia numbered 180 working public wells and 6,046 private wells. Wealthy families who donated a well to the city might have an inscription added to the carvings on the well head.”

Several famous pozzi are listed with TurismoVenezia. They include the red marble well in the courtyard at Ca’ d’Oro by Bartolomeo Bon in 1427, the bronze wellheads at the Ducal Palace and the Palazzo Corner della Ca’ Granda.

Eventually the system of wells was replaced with an aqueduct and later a direct connection with the mainland. A small number of the original wells, now sealed, can still be viewed on a walk through the many neighborhoods of the city.