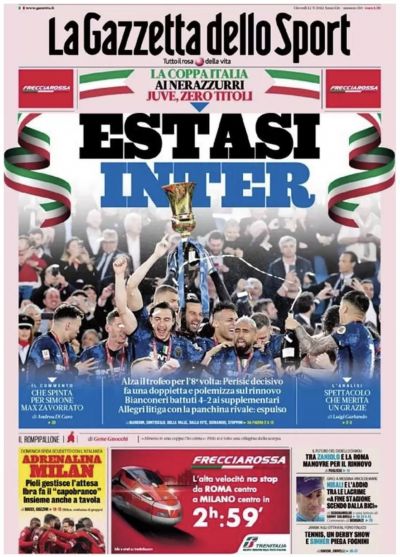 It has been 100 years since the first Coppa Italia took place and the latest just ended in May. Oh, what a match! It had all the drama you could want with lead changes and overtime leaving one team with the Corrarda and the other team not receiving any trophy for the first time since 2011. Inter vs. Juventus is called the “Derby de Italia” after a newspaper coined the phrase in 1967. Meaning, this is not some local derby. These two teams are so big, followed by so many people, that this is THE Derby of the entire country of Italy. These two teams being in this year’s Coppa Italia made it that much more special. When you add it being played at the Stadio Olimpico in Rome, in front of a sold-out crowd, it was simply beautiful to watch.

The first half started with an early goal by Nicolò Barella in the seventh minute. The game looked to be in Inter's hand, even though Juventus had some real chances in the first half by their strikers that they did not capitalize on. Juventus was not to be outdone and recollected themselves heading into the second half of the match.

Juventus was able to score twice in the same amount of time it took Inter in the first half with the Brazilian striker Alex Sandro scoring in the 50th minute. Newly acquired Serbian striker Dusan Vlahovic added to the total scoring right after at the 52nd minute from an assist from Argentine striker Paulo Dybala. Two goals in two minutes looked to be a total breakdown of Inter on the defensive front. But somehow Inter was able to keep their composure and got awarded a penalty after Lautaro Martinez was fouled in the box. Hakan Calhangolu took the penalty, putting it in the back of the net, finding Inter the equalizer they so desperately needed.

This allowed for the match to be put into extra time. Inter all year has been seen as having the advantage in these types of situations because their bench of players is so deep. Croatian forward Ivan Perisic was able to step up with star Inter players like Calhanoglu and Martinez on the bench. He managed to get a brace and score in the 99th minute on a penalty kick and then once again from outside the box, sealing the deal for Inter and awarding them their eighth title in the competition.

Winning the Coppa Italia tournament is worth more than ever with the value of the TV right’s increasing making the pot for winning bigger than usual. According to Forbes, for making the finals, Inter and Juventus will both receive €3 million. Inter will receive another €4.5 million for the win and receive the bid to play in next year’s Suppercoppa match. Being in the match is worth €3 million bringing the grand total to €10.5 million. This is a great win financially and for the Interisti under new head coach Simone Inzaghi. After the match Inzaghi stated “This club never gives up. Let's enjoy this trophy with the club and fans.”