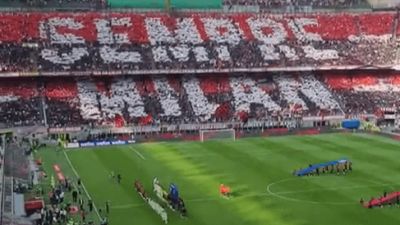 AC Milan are the new champions of Italy. It took until the very last week of Serie A to crown the newest title winners, but for the first time since the 2010/11 season, the Rossoneri will wear the Scudetto with their 19th team title.  The last part of the schedule, head coach Stefano Pioli had his team on form winning their last six league play matches and not having a loss since mid-January. They pulled just ahead of in-city rival Inter in the 28th week and never gave up the top of the table after.

The last week of the season the scudetto was still not clinched for Milan. They could claim the title with a win in the last match vs Sassuolo and that is exactly what they did in spectacular fashion. Sassoulo is known for slaying giants and had the home field advantage. But that did not matter much when the stadium looked like a home match for Milan with red and black filling the stadium, flairs being lit, and the Milan ultras singing their team's song. Milan prevailed with an easy 3-0 win to send their fanbase into a frenzy.

The odds of Milan winning Serie A this season were not great. Most sport books had them finish around fourth place with 1/12 odds. Few thought this would be a championship run season. Many thought a few more years might have been needed to get this team ready. This was obviously proven wrong as the season went on and they started looking like real contenders especially after winning the Derby della Madonnina against favorites Inter. Inter was up 1-0 in that match until Olivier Giroud scored two goals in three minutes forever changing the directory of the scudetto race for the season.

After losing star goalkeeper Gianluigi Donnarumma to Paris Saint-Germain in the off season and losing Hakan Çalhanoğlu to in-city rival Inter on a free transfer, it did not look like this team was built for a scudetto. Milan did not have a lot of stars and the most recognizable player on their team was 40-year-old Zlatam Ibrahimvovic who had limited time on the pitch due to a knee injury. This was a team victory with players such as Sandro Tonali, Fikayo Tomori, and Theo Hernadez taking big steps forward. But none bigger than MVP of Serie A Rafael Leao who did a remarkable job stepping up in the moments they needed him the most.

Celebrations were even more sweet for Milan fans knowing that they were able to keep Inter from winning their 20th scudetto. Milan and Inter share the same city, the same stadium, and the same Duomo, but outside in the streets of the city it was all read as black as the milanisti took the city over to celebrate their team's victory.

I have been saying it all year, however it is worth pointing out again. This last season was one of the best I have ever seen. The title winner was up for grabs the entire season making it a nail-biter up until the very end. For the first season ever, I got to watch professional American analysts go to Italy, call matches, and interview players. The investment in American audiences has not gone unnoticed and Serie A now has opened a North American headquarters in New York City. With Milan being one of the most followed teams for Americans this might be the jump start they needed to make their mark in American sport fandom. Next season starts the 13th of August. Forza Serie A.