It's Coming to Rome! 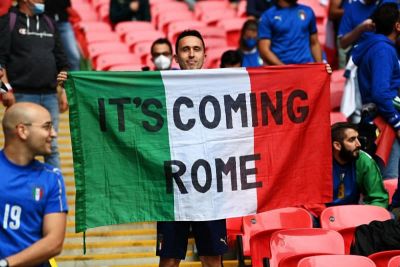 Italy beat England in a penalty shootout to win the European Championship at Wembley Stadium in London on July 11, 2021. “It’s coming to Rome. It’s coming to Rome,” Italy defender Leonardo Bonucci shouted into a TV camera amid the celebrations, mocking the famous lyric “it’s coming home” from the England team’s anthem.

It was less than four years ago that Italy plunged to the lowest moment of its soccer history by failing to qualify for the World Cup for the first time in six decades. Now, they are the best team in Europe. Roberto Mancini, Italy’s coach, led the team on a national record 34-match winning streak before adding a second European title (the first came in 1968) to their trophy case. This win follows Italy’s four World Cups.

“It was impossible even to just consider this at one stage,” Mancini told the AP, “but the guys were just amazing. I have no words for them.”

“The boys couldn’t have given more,” England captain Harry Kane said. “Penalties are the worst feeling in the world when you lose. It’s been a fantastic tournament — we should be proud, hold our heads up high. It’s going to hurt now, it’s going to hurt for a while,” Kane said to the AP.

Both sides had fought out a 1-1 extra-time draw at a raucous Wembley. Keeper Gianluigi Donnarumma saved from Jadon Sancho and Bukayo Saka after Marcus Rashford hit the post, as Federico Bernardeschi, Leonardo Bonucci and Domenico Berardi all scored for the Italians.

It was the first final to be decided on penalties since Czechoslovakia beat West Germany in 1976 and will be wildly celebrated in Italy after they lost in the final in 2000 and 2012.

Italians poured into streets and squares in massive numbers celebrating a success widely seen as a rebound from the heartbreak failure of not qualifying for the last World Cup. Fireworks and music broke out across the country after the win, as flags waved and euphoric fans sang out in the hot summer night.

"Great gratitude to Roberto Mancini and our players who have represented Italy well and have brought honour to sports," President of the Republic Sergio Mattarella said in a statement. "You have given us a magical night," said Italian Olympic Committee chief Giovanni Malago. "It's like living in a dream you don't want to wake up from. Italy has woken up from the nightmare of the pandemic," said a fan.