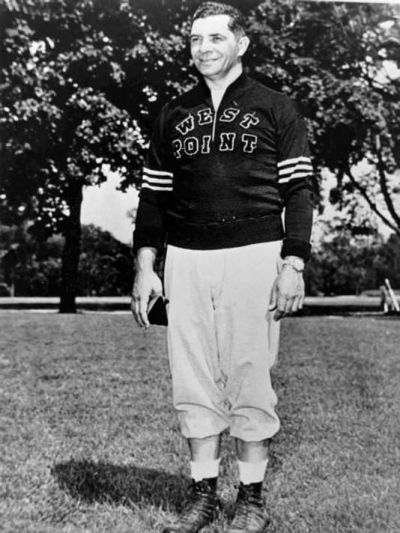 At St. Cecilia, Lombardi was given his first opportunities as head coach for football and basketball and he turned out to be extraordinarily successful at both. Lombardi stayed on for a total of eight years; five as head coach.

Donald Phillips in 2001 recalled the stellar debut and overall record of Coach Lombardi at St. Cecilia’s: “Under his direction, the high school won six state championships in the two sports. In football, Lombardi’s teams ran off a 32-game unbeaten streak. And, at one point, his teams won 23 games in a row…Part of the reason that Lombardi’s players were willing to work with him was that he nurtured and cared for them like a father. When Lombardi succeeded, so did they. Twenty-two of St. Cecilia’s players were named to All-County and All-State teams while he was coach.”

Lombardi left for Fordham in 1947 to coach the freshman teams in football and basketball. The following year he served as an assistant coach for Fordham’s varsity football team. His coaching stay at Fordham would be a brief one.

In 1948, Lombardi fathered his only daughter, Susan Lombardi. Vince Jr. was now six-years-old. Susan would be the second and last child born to Vince and Marie Lombardi.

Lombardi believed he was motivated and prepared to take on the responsibilities of becoming a head coach at the college level. One such opportunity presented itself in 1948 at Canisius College of Buffalo, NY. A Jesuit-school grad from Fordham, Lombardi felt certain that he was the most qualified and best candidate for the Canisius job.

Larry Felser, an award-winning sportswriter for the Buffalo News, recalled how Lombardi ruefully responded: "Canisius was the disappointment of my career. In 1947, their coach Earl Brown was hired by Auburn as its new head coach and I wanted that Canisius job. I came to Buffalo, interviewed, and thought that I had it. Instead, they hired some local lawyer (Jimmy Wilson) from years before." If Lombardi were hired in 1948, can you begin to imagine how Canisius College would have developed and transformed its program into a D-1 football powerhouse like Notre Dame or Boston College? Most believed Lombardi was politically snubbed and even shunned by the Canisius decision-making process. Lombardi’s early ambitions to be a college head coach were crushed, sending him reeling and even privately doubting himself and wondering whether a head coaching job was in his imminent future. Fortunately for Lombardi, he rebounded with a fury and kept pressing forward.

Following the 1948 football season, Lombardi accepted another assistant’s job at the United States Military Academy, a position that would greatly influence his future coaching style. As offensive line coach under legendary head coach Colonel Red Blaik, Lombardi worked long hours and refined his leadership skills.
Blaik’s emphasis on execution would become a hallmark of Lombardi’s NFL teams. Phillips wrote about Blaik’s influence on Lombardi: “Coach Earl Blaik was an important person for Vince Lombardi to have adopted as a mentor. His practice sessions were precise, efficient, and highly organized. Blaik was conscientious, honest, and fair, though also a hardworking taskmaster. Vince savored every moment and appreciated all that he had learned from his mentor.”

Lombardi coached at West Point for five seasons with varying results. The 1949, 1950 and 1953 seasons were very successful, but the 1951 and 1952 seasons were poor and mediocre, respectively, due to the aftermath of the cadet cribbing scandal in the spring of 1951, severely depleting the talent on the football team.
To cite, Lombardi applied for head coaching jobs at West Point and Notre Dame, and he was rejected for both positions because of his Italian ethnicity; it was troubling and perplexing for Lombardi. David Claerbout, a biographer, reflected on the hiring dilemma and obstacles that oppressively faced Lombardi in his coaching search writing: "Lombardi watched helplessly as the other less competent coaches were elevated for political and ethnic reasons. He once applied for the head coach job at Wake Forrest; Lombardi was confident he was the most qualified for the job..."When the school did not call, Lombardi called an insider friend who told him Wake Forest will never hire a coach whose last name ends in a vowel. This is something Lombardi said himself when he was removed from consideration for the Army head coaching position when the renowned Earl Red Blaik - on whose staff he served - resigned, also after the '58 season…Lombardi was an Italian Catholic in an era of Waspish (and, in some parts of the gridiron world, Irish and Polish Catholic) dominance."

Following these five seasons at Army, Lombardi accepted an assistant coaching position with the NFL’s New York Giants. He was even successful as the offensive coordinator for the Giants from 1954 to 1958, under head coach Lee Howell. In fact, Lombardi coached side-by-side with defensive coordinator Tom Landry, who later coached the Dallas cowboys and is an inducted member of the NFL Hall of Fame.

The year before Lombardi joined the staff, the Giants suffered through a three and nine record and scored the least amount of points in the NFL. Within three years of Lombardi's arrival, the Giants won the NFL Championship and three division titles. Including the five years as the Giants' offensive coordinator, Lombardi never experienced a losing season in football on any level.

Tweet
More in this category: « Coach Vince Lombardi: The Early Years It's Coming to Rome! »