The Bridges of Rome and Venice 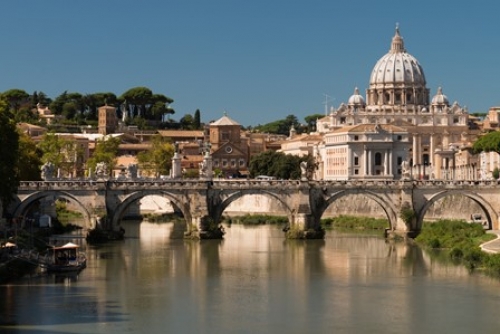 The Bridges of Rome and Venice

It has been said that a river is the heart of a city, and Rome's heart is the Tiber River, one of the great historical rivers in the world. The Eternal City stretches along the banks of the Tiber River, crossing it with thirteen bridges. The Romans were the world's first major bridge builders, but it's impossible to determine the exact date and origin of their first bridge. However, the DNA of the Roman bridge can be found in its building material (spoila), arches, pillars, foundations and abutments.

Rome is believed to have as many as 900 bridges, including 330 made of stone, 34 made of timber and 54 aqueduct bridges. Perhaps Rome's most famous bridges are Ponte Eliot-Ponte Sant' Angelo, Ponte Sisto and Ponte Vittorio Emmanuelle III. When Emperor Elio Adriano (Hadrian) built his monumental tomb, Castel S. Angelo, he decided to give it access - a bridge over the Tiber River, decorated with eight columns (four on each side), each with a statue on top, and splendid railings and peacocks.

The Ponte S. Angelo is made up of five arches, three smaller modern ones and one on each bank; and the three central arches date back to Roman times. Its stones have been worn down by the millions of pilgrims who have traveled across it on their way to pray at St. Peter's. It has the distinction of being the most beautiful bridge in Rome.

The architect responsible for Ponte Sisto is Baccio Pontelli. Made up of four arches, the bridge was inaugurated in 1475 and was the first one built in over a thousand years after the fall of the Roman Empire. It was once Rome's equivalent to Florence's Ponte Vecchio, because of its shops and booths, which were removed later.

Engineer Ennio De Rossi designed the Ponte Vittorio Emanuele III, which was completed in 1911 on the 50th anniversary of the unification of Italy. It has three arches and four decorated groups, representing United Italy, Liberty, Loyalty and Oppression Defeated.

The Ponte Nenni is Rome's most modern bridge, and architect Luigi Moretti designed it. Inaugurated in 1980 and built in reinforced concrete, the bridge can be crossed underground, as well as on foot or by bicycle.

Rome's bridges, however, cannot compare to the more famous and romantic ones found in Venice, and none is more famous than the Rialto. Many believe that lovers will be granted eternal love and bliss if they kiss on a gondola as it passes under the Rialto at sunset.

More in this category: « Altopiano dei sette comuni - Between Tradition and Immigration Five Years after the Earthquake »