The Little House of the Owls: A Hidden Treasure in Rome 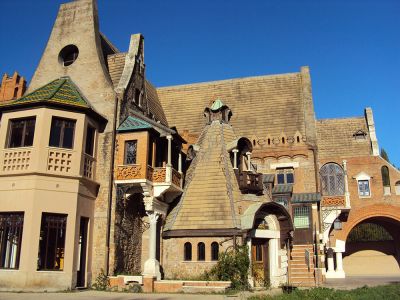 Visiting Rome, especially at the height of the tourist season, can be a frustrating experience. All the “must see” venues are besieged, and you have to fight your way through forests of selfie sticks, undermining the pleasure in the great things people have come to see.

There are peaceful alternatives, though, that are just as interesting. If you walk along via XX Settembre past the British Embassy, through the Porta Pia (Michelangelo’s gateway to the city, built from 1561-1565 for Pope Pius 1V) and continue along via Nomentana, you will come to a long brick wall on your right which conceals a large park. The first small entrance will take you up some steps to a villa where there are temporary exhibitions. The main grand entrance leads to the Villa Torlonia (architect Valadier) which was given by the Torlonia family to Mussolini as an administrative centre in 1925 for the rent of 1 lira per annum. Mussolini actually lived in the Palazzo Venezia in central Rome. Inside, there is a shop and a small museum which houses artefacts rescued from the house and grounds, including plaster reliefs by Canova. An air raid shelter was constructed beneath the villa with an air-tight bunker to resist bombs and chemical warfare. Allied High Command took over the building in 1944 but, after the war, it remained neglected until its recent restoration. It’s interesting to see that Mussolini still holds a place in the hearts of some Italians. There are faded bouquets left on the steps near the villa.

The park is very popular with Roman families, especially on Sundays, and you don’t find many tourists there. The gardens, with enormous umbrella pines, were laid out by Japelli, with winding paths, small lakes, exotic plants, and unusual buildings including a Moorish grotto, a tower, granite obelisks, statues, temples, and follies.

Best of all is the enchanting building on the grounds, known as the little house of the owls, La Casina delle Civette. It comes as a surprise to see a curious little fairy tale arts-and-crafts house in the middle of a grand Roman park. With its turrets, mullioned windows, arches and gables of different heights, it would be more at home in an English village. Even the roof is unusual, composed mainly of grey slate, but with brightly coloured ceramic tiles of glazed terracotta on lower levels. There are owl motifs in stone, wood and glass all over the cottage, hence the name.

It was originally built in 1840 as a “Swiss cabin” then much altered and expanded by the architect Enrico Gennari, and finally embellished in art nouveau style by Vicenzo Fasolo. The Casina was the residence of Prince Giovanni Torlonia until his death in 1938 and was intended to be a refuge from the grandeur of the main residence.

The building itself is a small museum of stained glass with 54 pieces originally designed for it and 18 others in frames all in stile liberty (art nouveau) style. The interior has been beautifully restored after fire, theft and vandalism, but not altered since the prince lived there and is a delight, with its wood panelling, mosaic floors, nooks and crannies, made-to-measure furniture, and oddly-shaped spaces.

As is often the case in Italy, the system for entry is idiosyncratic. There are no notices to tell you, but, if you want to see this little gem, you will have to walk back to the Villa Torlonia and buy your ticket there. It is definitely worth it; you will be enchanted.

This article was originally published in Italy Magazine.