Five Years after the Earthquake 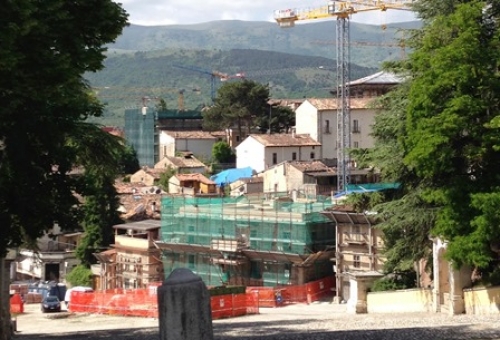 Teacher Gianfranco Di Cristoforo paused this spring in front of his childhood home in L'Aquila, damaged by the April 2009 earthquake, but still standing, and looked up at the metal supports that surround it.

The metal scaffolding means the home is suitable for repairs, Di Cristoforo said. The fate of homes and buildings with wooden supports is not certain. Other buildings, too damaged to rehabilitate, have been or will be demolished; still others may incur structural problems once nearby damaged buildings may also have to be razed, Di Cristoforo continued.

L'Aquila, the capital of the province in Abruzzi that bears its name, was said to be the home of "99 churches and 99 fountains," among them a fountain that commemorates the city's favorite number, 99. But L'Aquila is not the same medieval jewel it was before the 2009 earthquake struck. More than 300 people were killed, and many homes and buildings were damaged or destroyed. About 20,000 people have left the city, leaving around 50,000 residents. Earlier this year, the military began permitting the public to enter the most severely damaged areas of the city, which had been cordoned off to the public.

In 2009, officials had said reconstruction would take five years. Five years later, reconstruction is ongoing, with cranes sprouting like weeds from the city skyline. In the center of town, descriptions of significant construction projects in the city are displayed on vertical billboards. The costs of the projects total billions of Euros.

Many things have changed in daily life in this medieval city high in the Appenine Mountains near the Gran Sasso peak. Di Cristoforo, a physical education teacher, now teaches at a newly constructed modern-looking high school in L'Aquila, Istituto d'Istruzione Superiore Domenico Cotugno, because the original building in the center of town was damaged. A temporary primary school on the edge of town replaced the damaged school, an order of Roman Catholic nuns, the Suore Zelatrici del Sacro Cuore, once operated in the heart of the city.

Forte Spagnolo, a Spanish fort used as the National Museum of Abruzzo, "was damaged, but not the original part," said Di Cristoforo - testimony to the builders of 1534, who constructed the fort under the Spanish viceroy, Don Pedro de Toledo. The art and artifacts, including the skeleton of a prehistoric mammoth, were removed for reconstruction of a more recent addition. That reconstruction is ongoing.

A beautiful and notable blue and white ceramic bas-relief of the Resurrection of Christ, by Andrea della Robbia, at the baroque San Berardino of Siena was destroyed. The basilica was damaged and is still undergoing reconstruction five years later.

In the main square, La Piazza del Duomo, an open air market, now takes place one Sunday a month instead of weekly as it did before the earthquake. But, it is a sign the L'Aquilan way of life is resuming gradually. The earthquake also affected Di Cristoforo's family; the home outside L'Aquila that he shares with his wife, Domenica Clementini, also a teacher, and their three children was damaged, but later repaired.

Another symbol the L'Aquila way of life was undamaged and continues its function in the face of adversity is the Fontana delle 99 Cannelle, which was built, writer Buccio dal Ranallo said, to commemorate the 99 castles of the founders of L'Aquila. Tucked among the city's convoluted streets, the fountain finished in 1272 has 99 spouts that project from the mouths of sculpted heads of humans and animals, each one different, from around a cobblestone trapezoid piazza. "No one knows the source of the water," Di Cristoforo said.

Though students are back studying at the University of L'Aquila and other schools in the city, no one knows when the city will finally be repaired, certainly well beyond the original five year estimates. As Di Cristoforo said, reconstructing L'Aquila "could take 20 years."