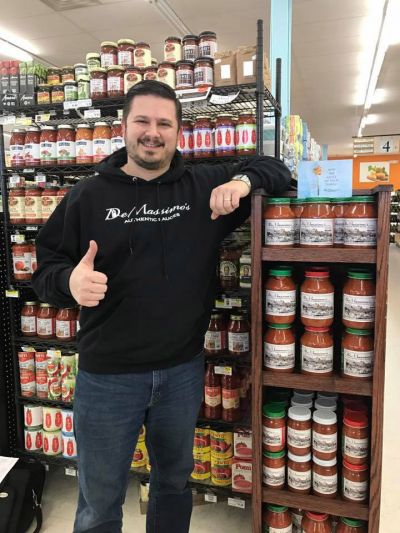 Some people remember their ancestors by sharing stories over family dinners or at gatherings. Others write books. Some focus on preserving their heritage by researching, collecting and piecing together their entire family tree. And some make sauce. That’s right, sauce. What better way to reminisce about your nonnas and their nonnas and their nonnas, too, than by closing your eyes over a bubbling pot of tomatoes, garlic and spices, all blended together perfectly to release the unforgettable scent of nonna’s kitchen on a Sunday afternoon? That’s exactly what Mike DeMassimo does.

Mike even takes it one step further and shares a piece of his family with us. Mike is the president and owner of DeMassimo’s Authentic Sauces based in Columbus, OH. This isn’t your typical sauce story… or maybe it is? “Man, passionate about his family’s Italian heritage, decides to sell Nonna’s sauce to the public.” This headline does ring true, however there is much more to Mike’s story. Over the course of a few emails and a 60-minute phone call, my new friend – and yes, I now consider him a friend because after speaking to Mike just once, it would be impossible not to refer to him that way – welcomed me into the DeMassimo family with open arms.

He shared his family story with me: from his large, yet unfinished, tattoo of the entire country of Italy on his leg to his 3-year-old daughter, Olivia, the master taste-tester, to his invitation to his “Grammy’s” town in Italy by no other than the mayor, himself. It’s very easy to write a story about someone who sells something. But it’s even easier to write a story about someone who has so much passion that the term “calling” comes to mind. Mike is not a chef. In fact, his resume dubs him an English teacher and a high school principal.

He spent 18 years in the education field. It’s safe to say that his students and fellow faculty and staff recognized his “calling” before he did; he regularly cooked lasagna and other Italian meals (featuring the family sauce, of course) for them. In fact, it was a friend from work that told him he should sell his family sauce at a local farmer’s market. It all started with Mike’s Grammy, Maria Ioffredi, born in 1911 in San Giovani in Galdo, Molise, Italy. Maria arrived on Ellis Island, via the SS Olympic, on Nov. 17, 1920. “My Grammy was one of my best friends. She was one of the matriarchs in my family that I loved dearly and listened to her every word. She also made a beautiful Arrabbiata sauce! She is one of the inspirations for DeMassimo’s Authentic Sauces.” His other grandma and his mother being other inspirations. Mike wanted to honor his grandmothers’ memory and felt that the sauce was the best way to do so. So, in 2016, he took a leave of absence from work.

This year was his first full year as an entrepreneur. When Mike told his wife, Bethany, that he wanted to leave the education field and mass produce the family sauce, she simply replied, “Ok, let’s do this!” Mike credits Bethany’s support and love as the main reason he is successful. Mike and Bethany started at local farmers markets; they brought 120 jars to their first one and sold out. The success continued week after week and they quickly entered local grocery and specialty food stores. He’s put a lot of sweat equity into the business and isn’t about to slow down.

Mike’s current focus is on retail growth in Columbus and Cleveland. “We have growing brand recognition and it’s really exciting!” He told me. Currently, the DeMassimo line includes a traditional tomato sauce, a spicy arrabbiata sauce and a pizza sauce. The sauces are all-natural, gluten free and have no additional sugar added to them. Mike’s commitment to the community also makes him stand out amongst his competitors. He has used a division of Arc Industries in Columbus, OH that staffs special needs adults to cap and label his jars. DeMassimo’s donates to the Mid-Ohio Food Bank which services the local community because “Some people don’t get to eat good sauce and I’m trying to change that.”

As if sauce-making wasn’t enough, Mike is also a part of an upcoming cooking show, “The Chef and Busy Cook.” The 5 to 7-minute cooking segment, featuring Mike’s sister as the Chef, promotes local ingredients and will air on social media outlets soon. Mike says that DeMassimo’s “is more than the sauce. It’s the entrepreneurial spirit and the mission of the business – honoring our ancestors and bringing families together at the dinner table.”

Of all the successes DeMassimo’s Authentic Sauces is having, Mike is most proud of his invitation to his Grammy’s village in Italy. The mayor and townspeople of San Giovanni are proud that their town is featured on the labels of DeMassimo’s sauce jars and invited Mike and Bethany to visit in late October. Mike’s grandmother’s birth certificate was on display in their city hall along with an announcement of their visit. The DeMassimo’s were also contacted by the president of a local winery in Campobasso hoping to add themselves to Mike’s itinerary, to which he obliged, of course! It surely is the trip of a lifetime. “Words cannot express how excited and emotional I am about this opportunity.

The Lord has opened many doors in our journey but this one I cannot simply put into words,” Mike said. It seems that although Mike’s grandmothers and parents paved the way, the DeMassimo family legacy is just beginning.

View the embedded image gallery online at:
https://www.lagazzettaitaliana.com/people/8612-the-sauce-man#sigProId2e4cf1020f
Tweet
More in this category: « Cleveland: "The BBQ Capital of the Northcoast" August A. Napoli Jr. »