Cleveland: "The BBQ Capital of the Northcoast" 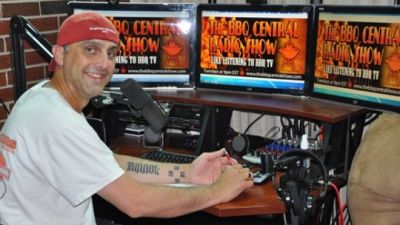 When thinking about Cleveland, many people don’t immediately associate barbeque with it. But, Greg Rempe, host of the Cleveland-based internet show “The BBQ Central Show” most certainly does. In fact, he affectionately calls the city he’s lived in since middle school the “BBQ capital of the Northcoast.” Originally from New York, Greg and his family moved to Bainbridge, OH when he was in the sixth grade. His mom, Connie Rempe (nee LaPiana) is Sicilian, her grandparents hailing from Palermo. She’s also a regular contributor to the BBQ Central Show with “Connie’s Recipe Corner.” When asked about his Mom’s influence on his cooking Greg says, “my mom did teach me how to make a proper red sauce, which my entire family loves to eat! I am proud of being Sicilian and I am also proud of being German…both cultures have such strong food histories, it’s hard not to love both!!” La Gazzetta Italiana had the opportunity to learn more about Greg and “The BBQ Central Show.”

La Gazzetta (LG): What is the BBQ Central Show?
Greg Rempe (GR): It is an internet based show that airs live each Tuesday night from 9-11 p.m. EST and covers the entire industry/sport of barbecue and grilling. The show is recorded at the same time and is then uploaded to i-Tunes, Google Music and all of the top podcast directories for consumption at your convenience. Subscribing to the show through one of these platforms is the easiest way to never miss a show or to go back and listen to a favorite segment or guest.

LG: How did you get started?
GR: My wife, Becky, bought me my first cooker (Weber Smoky Mountain) about 13 years ago and I had no idea how to use it. I found a website that was specifically dedicated to the WSM and became a very active member of that forum. Eventually, I started my own forum a year or so later that was dedicated to barbecue and grilling. At that time, there were a number of other forums coming out so I started a podcast to differentiate my site from the others. That was a pre-recorded show that I released each week. After a year or so, there were many BBQ podcasts sprouting up so I decided to separate myself again and looked into doing a live show over the internet. I ended up finding a guy in LA who was starting an internet talk radio station and was looking for some regular hosts. He was leery at first but soon realized that I could bring a great show to his station each week. It quickly became the most popular show on his station. After a few years of doing the show with LA Talk Radio, I went fully on my own and expanded the show from one hour to two hours. I have been doing the live version of the show for 10 years.

LG: Where did your passion for open flame cooking come from?
GR: Probably like most young men…from my father. Although, there was no “traditional southern” barbecue going on at my house when I was growing up. I would sit on the porch and watch him grill steaks, pork chops and ribs and they tasted good…it was always a treat because he didn’t do it all the time. My favorite grilling item is a ribeye steak.  In my opinion, there is no better tasting or more flavorful steak than the ribeye cut (medium rare)!

LG: Who are some of your favorite guests you’ve had on the show?
GR: It is hard to narrow it down because there have been so many. A lot of the people on my show aren’t famous or as recognizable as a Bobby Flay or a Michael Symon, but in this subculture, they are the biggest stars. Some of my favorite conversations have been with Steven Raichlen (BBQ Hall of Famer), Ray “Dr. BBQ” Lampe (BBQ Hall of Famer), Blake Carson (Carson Rodizio), Tuffy Stone (Cool Smoke BBQ Team), Sterling Ball (Big Poppa Smokers), Sam Zien (Sam The Cooking Guy), and John Markus (Emmy award winning TV producer)…but the list is long!!

LG: Who is your biggest fan?
GR: My wife Becky has been my biggest supporter since day one. I don’t know if I’ve missed a total of 10 shows in 10 years and it’s because she will take over the house when I need to go on the air. She knows that I love doing this and has supported me in every way possible! However, my “biggest fan” has to be Teresa Galioto. She is a newer “Centralite” (name given to my fans) but one of the most passionate promoters of my show. Her enthusiasm for the show is great and I really appreciate her!

LG: When you aren’t cooking BBQ, what’s on the menu?
GR: I think I make a pretty awesome meatloaf (which is really good smoked too) and a very unhealthy “Mac Daddy” Mac-N-Cheese. It has 2lbs of bacon in it!! I also love to make Spaghetti and meatballs!

LG: What can listeners gain from tuning in to your weekly show?
GR: They will get an overview of what is happening in the live fire cooking industry, catch up on the latest BBQ contest results, hear interviews from the best authors and bloggers in the BBQ/Grilling industry, get tips and tricks from the best cooks in the country, and, most importantly, experience my rapier wit and dynamic sense of humor!

It’s true! Greg’s humor and wit certainly emerge throughout each of his shows. Who knew talking about BBQ could be so fun? For more information, visit www.thebbqcentralshow.com and “Get in the Smoke!”