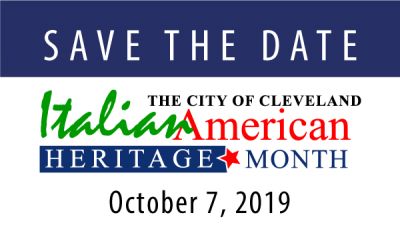 The Honorees will be recognized at the Opening Ceremony for Italian American Heritage Month at the Cleveland City Hall Rotunda on Monday, October 7, 2019 starting at 6 p.m. The event is FREE and open to the public.

Giuseppina and Francesco Catena, affectionately known as “Mama and Papa,” opened Mama Catena Vino e’ Cucina at 711 Babbit Road in Euclid, Ohio, in 1989.  Daughters Fran and Rina and nephew Frank, along with other family members, help to operate the Cucina.  In May 2017, a fire destroyed the restaurant.  But the family rebuilt and reopened a year later.  La Famiglia Catena believes that their restaurant is an expression as well as an extension of themselves and their family.  At Mama Catena Vino e’ Cucina, great food, family, and friends are celebrated and the Catena Family wants to share and enjoy it with all.  This philosophy is in their minds and hearts as they prepare each and every dish that is served from their Cucina.  Giuseppina and Francesco Catena left Catania, Sicily, on April 5, 1966 with their two children to come to America.  They had no idea what to expect, they just hoped for a better future and America meant just that to them. They left loved ones and all that was familiar to travel to a land filled with uncertainties to give their children a better way of life. This was their intention when they purchased a little restaurant in Euclid, Ohio.  Owning a business was their way of giving their children opportunity in America. The four Catenas that landed in America in 1966 have grown to 20, all of whom gather at Mama Catena Vino e Cucina to celebrate holidays together.  They put La Famiglia above all else and continue to honor and celebrate their Sicilian traditions.

Benjamin DeRubertis, Sr., is a professional calligrapher and has owned Calligraphy Studio in Cleveland Heights for over 50 years.  His parents emigrated from San Giovanni in Galdo, Italy, in the 1920s and settled in Cleveland’s Little Italy.  They eventually moved to Collinwood where DeRubertis attended and graduated high school.  He won a scholarship to the Cleveland Institute of Art, where he met Professor Otto Ege who introduced him to the art of calligraphy.  While serving in the U.S. Air Force, he attended drafting school and worked in the Art and Visual Aids Department.  During Eisenhower’s administration, he penned calligraphy in the Social Office of the White House designing and writing invitations and place cards.  DeRubertis returned to Ohio after being discharged and attended Kent State University.  In 1956, he began working at Calligraphy Studio, then owned by Scott Leslie who started the company in 1929.  DeRubertis purchased the company in 1965, and in 2009 he passed the company on to his son Benjamin, Jr.  DeRubertis, Sr., however, has not completely retired and continues to help out with projects.   Some of the company’s clients include Eaton Corporation, Sherwin Williams, Cleveland Clinic, University Hospitals, Oberlin College, and the American Society of Metals, International.  DeRubertis is a member of the Italian American War Veterans, the American Legion, and the Collinwood Memories Club.  He has been married to wife Nancy for 64 years and together they have three children, three grandchildren, and one great-grandchild.

Anthony Ianiro was born and raised in Cleveland, Ohio.  He is the second of four children (older brother Luigi and younger sisters Miriam and Lucia) of Remo and Anna Maria Ianiro who immigrated to Cleveland from Rionero Sannitico and Castel di Sangro, Italy, respectively.  Anthony graduated from Franklin University in Columbus, Ohio, with a Bachelor of Science in Business and spent several years as an equities analyst for The

Ohio Company in Columbus, Ohio, and Olde Equity Research of Olde Discount Brokers in Detroit, Michigan.  During the late 1990s, Anthony returned to Cleveland and eventually joined his brother’s landscape business, Ianiro Landscape Development.  In the 20 years since Anthony joined Ianiro Landscape Development, the company has grown to net over a million dollars in sales, which includes maintenance and landscape construction work.  They employ legal immigrants from Mexico using a VISA program, similar to what Italian families did when they immigrated to America.  Anthony is a member and has served as president of the Rionero Sannitico Recreational Club and is also on the board of Club Molisani.  His believes that there is no greater culture than the Italian culture and this belief prompted him to get involved with the Italian Cultural Garden.  He and his company volunteer many hours to help keep the garden looking beautiful.  Anthony is engaged to Angela Spitalieri and they will marry in November 2019.

Mayor Frank G. Jackson is currently serving his historic fourth term in office as the Mayor of Cleveland, Ohio.  This makes him the City of Cleveland’s longest serving Mayor. During his time in office, Mayor Jackson has been an advocate for building equity and opportunity for all Clevelanders in all neighborhoods.  Mayor Jackson is the son of an African American father and an Italian American mother.  He grew up in the Central Neighborhood and graduated from Max S. Hayes High School.  After being discharged from the U.S. Army, Jackson earned an associate degree from Cuyahoga Community College.  He went on to attend Cleveland State University, earning a bachelor’s degree in Urban Studies and History, a master’s degree in Urban Affairs from the Maxine Goodman Levin College of Urban Affairs, and a law degree.  Jackson began his career in elected office as City Councilman for the Central Neighborhood and eventually became City Council President.  He began his public service career as an Assistant City Prosecutor in the Cleveland Municipal Court Clerk’s Office.  Mayor Jackson continues to reside in the Central Neighborhood.

Carmen Vincent Messina was born and raised in the neighborhood around E. 37th St. and Payne Avenue in Cleveland, Ohio, and graduated from Max S. Hayes High School.  He is the fifth of six children born to Carmen Vincent Messina, Sr. and Grace Ann Sidari-Messina.  His father was born in Catania, Sicily, and, while his mother was born in the U.S., her parents emigrated from Calabria, Italy.  Messina had a close relationship with his grandparents and learned many Italian traditions from them which he has passed on to his family of five children and nine grandchildren.  In his professional life, Messina started as a business owner.  He owned and operated Messina’s Italian Imports at the Westside Market, selling imported meats, cheese, and other goods hard to find in the U.S.  As his family grew larger, he sought other employment and worked as a driver for the RTA, then in 1999 became a seasonal driver for the City of Cleveland.  This led to work in the Recreation Department as a handyman and an opportunity to work on a large construction project for the city with Commissioner Michael Cox.  In 2007, Messina became Building Manager at Cleveland City Hall and has held the position since.  He has received a number of accolades for the stellar condition in which he keeps the building and for volunteering to assist with

a number of city events, including the

Mayor’s Holiday Food Basket Give-Away and Cleveland Conserves Year of Local Food Kickoff.  Messina also received commendations for going above and beyond in maintaining the Collinwood Recreation Center and overseeing the building of the Collinwood football field.  He has been indispensable with helping to prepare the Rotunda for the Italian Heritage Month Ceremony each year.

A native of Rome, Italy, Serena Scaiola is a graduate of the Università degli Studi di Roma “La Sapienza” with a doctoral degree in Italian literature.  She also completed a course of studies at Cornell University in New York.   While living in Rome, Scaiola worked for RAI-TV writing screenplays and case stories.  She has been teaching Italian language and literature at Kent State University, John Carroll University, and Cuyahoga Community College since she moved to the U.S. in 1995.  In 2006, the Ministry of Foreign Affairs appointed Scaiola Hon. Vice Consul of Italy in Cleveland and Ohio. After several years, she was elevated to Hon. Consul in recognition for her outstanding work.  During her 13 years as Hon. Consul, Scaiola represented Italian institutions in Ohio, assisted Italian authorities visiting the state, promoted the relationship between Italy and the U.S., and provided assistance to individuals in the vast Italian and Italian American community in Ohio.  She also organized or supported more than 50 events to promote business and commercial trades with Italian companies in Ohio and cultural and language programs.  In 2009, Scaiola collaborated with Mayor Frank G. Jackson to develop an official affiliation between Cleveland and Vicenza, Italy, as part of the Sister Cities International Program.  The President of the Republic of Italy named her Grand Officer of the Star of Italian Solidarity in 2010, a second civilian honor of the Italian Republic awarded upon recommendation of the Ministry of Foreign Affairs to nationals living abroad.  Scaiola has also done interpretation work for the Museum of Modern Art (MoMA) in New York, Eaton Corporation, Kirby, and La Gazzetta Italiana.

Rocco Scotti is best known for having sung the United States National Anthem more times than anyone.  He was born in Pennsylvania to Nicholas and Jean Madeline Biscotti, who emigrated from Foggia, Italy, and moved to Cleveland’s Little Italy with his family at the age of three.  Scotti attended Murray Hill School, Oliver Hazard Perry School, and in 1939 graduated from Collinwood High School.  He worked in construction and sales, but continued to study music and voice and perform.  Scotti first sang the U.S. National Anthem at Municipal Stadium on the Opening Day for the Cleveland Indians in 1952 and became a regular performer of the anthem at Cleveland sporting events for nearly 40 years.  His repertoire, however, included more than the anthem.  He also sang the tenor leads in performances of La Boheme, La Traviata, Othello, and Cavalleria Rusticana. He recorded two albums with the Rome Symphony Orchestra in Italy and appeared with actor Tom Hanks in the Great Lakes Shakespeare Festival in 1991. Scotti received a number of accolades, including the Civilian Purple Heart Award for inspiring patriotism through his exceptional singing, the Mario Lanza Award, and numerous recognitions from local and national veterans and civic organizations for his inspirational performances. Scotti also sang the anthem for Presidents Ford and Reagan and was named “Star-Spangled Banner Singer of the Millennium by Congress in 2000.  He passed away in 2015 at the age of 95.

View the embedded image gallery online at:
https://www.lagazzettaitaliana.com/local-news/9227-2019-cleveland-italian-american-heritage-month-honorees#sigProIdb8af9a4f5b
Tweet
More in this category: « LOCAL AUTHOR RICK PORELLO: AN ITALIAN AMERICAN OF DISTINCTION An Evening of Giving Thanks with Carmelina »