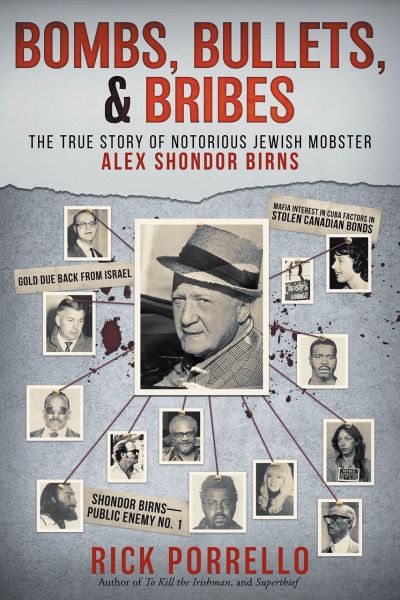 Readers all know of Rick Porello’s last book “Kill the Irishman” about Irish mobster Danny Green and Cleveland’s dark side. His newest book, “Bombs, Bullets & Bribes: The True Story of Notorious Jewish Mobster Alex Shondor Birns,” evolved out of his research for “Kill the Irishman” which was subsequently made into a movie. Having Mafia roots, he authored his first book, "The Rise and Fall of the Cleveland Mafia," after researching the murders of his grandfather and three uncles. They were mobsters who were killed in Prohibition-era bootleg violence termed “the sugar wars.” He followed that with “Superthief: A Master Burglar, the Mafia, and the Biggest Bank Heist in U.S. History.”

Porello came into writing later in his life. Interviewing him is like talking to your brother. His spoken words flow naturally, as if he’s known you his whole life. And his style is reflected in his work – he writes as he speaks.

After all the research he did in preparation for writing the book about Green, he realized one thing. Shondor Birns was as large a character as Green. “The difference was Shondor came first; Green was a protégé.” And now, after 11 years, the book is out and can be found in local bookstores.

A native Clevelander, Porello attended Cleveland Heights High School. As a youngster, he fondly recalls riding his bicycle down Mayfield Road to Murray Hill for the Feast of the Assumption. His Italian roots are in the Abruzzo region of southern Italy and Licata, Province of Agrigento, Sicily.

A colorful man, he recently retired as Chief of Police of the City of Lyndhurst. He wasn’t always a cop, although growing up in Cleveland Heights he always thought about it as a young man. Before he did any of that, his talent of having natural rhythm urged him to pick up “sticks” and become a professional drummer. He traveled with the likes of Sammy Davis, Jr., County Basie and other Jazz legends.

Although busy with the publication of his newest book, he may still find time to sit in for a brief session in a local jazz club.