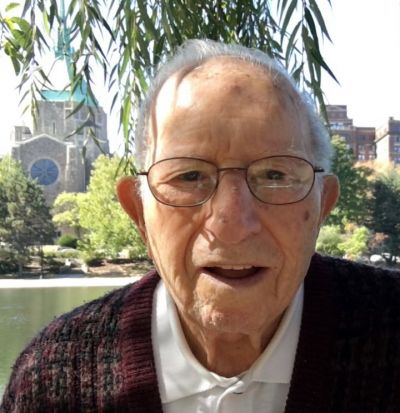 By the grace of God, James Malatesta will turn 100-years-old on March 30, 2019. Jim was born in Syracuse, NY and moved to Cleveland’s Little Italy in 1924 at the age of 5. He is the oldest living graduate of Murray Hill School. Jim and his wife, Antoinette, have been married for 71 years and share four children: Frank, Phyllis, Vince, and Teresa, four grandchildren and 4 great-grandchildren.

Jim served in the U.S. military during WWII in the 778th Battalion, Anti-Aircraft Division during the Battle of the Bulge. In 1985, he retired from the TRW Valve division after 36 years.

Jim joined the Knights of Columbus in 1952 and became a 4th degree shortly thereafter. He is a member of the VFW and Little Italy retirees. He is also very involved with Holy Rosary church; you can find him selling tickets in front of the church during the Feast of the Assumption.

He loves music from the old standards, some of his favorites include the Gaylords, Loui Prima and Phil Collins. James has a special love for animals, especially his dog.

Jim spends his time with his wife, family and friends, going to church, listening to music, going to meetings, out to lunch, and watching sports and movies. He will always be happy to share a shot of Sambuca with whomever stops by.

Tweet
More in this category: « An Invitation to Discover Our Ancestors' Traditions To Be or Not to Be an Italian Citizen: This is THE Question! »