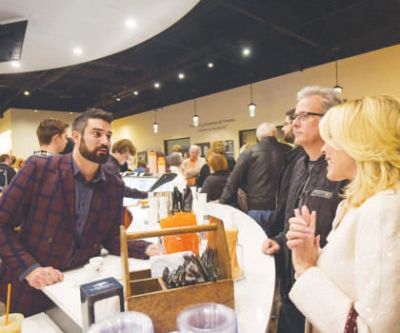 When I first saw the big, orange sign go up on the front of Fairlawn’s new Café Arnone, I thought, “Oh, great; another national chain.” It looked too polished, too organized, too modern to be locally owned, but it is.

nd it’s polished because the two young men running it, co-owners and first cousins Michael Maghes and Rocco LaRose, know what they’re doing.  Together they have years of experience in beverage sales, coffee importing and roasting, plus food truck operation. They even own a draft cleaning business helping local bars and restaurants keep their keg systems sanitary.

These guys not only have experience and business acumen behind them, they also have passion. Café Arnone isn’t just another coffee shop; it’s an authentic Italian coffee bar modeled on the ones Michael fell in love with when he studied in Florence in 2002.

“It was an emotional experience,” Michael recalls. “People would go to these cafés three or four times a day for coffee, sandwiches and gelato; they would gather there as a community. It was like it was their own home. That’s the feeling we’re trying to recreate here in Akron.”

And it’s working. Open less than three weeks, Café Arnone (ar-NO-nee) is already packed, and unlike a Starbucks where patrons line up and stare at their phones, people here are actually talking to each other.

“That’s the whole idea,” explains Rocco, a Loyola University graduate who majored in International Business with a minor in Italian. “That’s why we included a large U-shaped bar-so people could sit, relax and talk.”

The new café also features several tables and a private roasting room for coffee tastings and for meetings up to 12 people. There’s no cost; just call and reserve it.

The fine Italian coffees include popular styles-espresso, latte, cappuccino, Americano, etc., but also drip coffees, a slow brew bar and cold brews on draft that pour like a cascading Guinness.

Whatever you do, don’t leave without having an affogato, a shot of espresso poured over a scoop of homemade gelato.

Menu items include authentic piadinas, specialty toasts (like avocado), meatball subs and bombolini (Italian hole-less doughnuts). Plus, chefs and baristas work out in the open.

The café’s name comes from the cousins’ great-grandparents, the Arnone family, who came to America from Sicily.

“We’re passionate about Italian culture,” adds Michael, whose aunt, Marianne LaRose, also has a hand in the business.

When I asked why they chose orange for their logo, the boys tried to tell me that the color symbolizes hospitality, but then they both admitted: “We’re just Browns fans.”

This article first appeared in Mimi Magazine. Reprinted with permission.