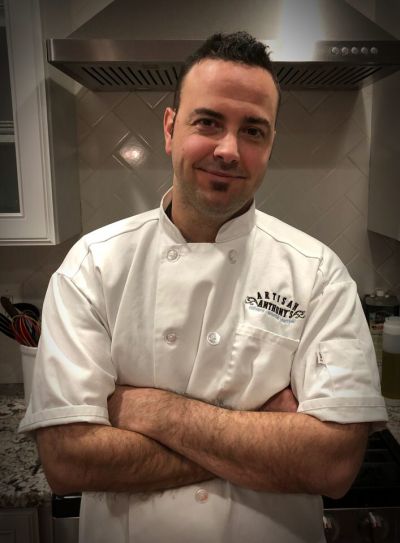 Growing up in the restaurant industry, Anthony Quagliata is no stranger around the kitchen. From dishwashing to bussing tables to running a kitchen as the Executive Chef, Anthony is experienced in every facet of restaurant life. It all started when he was a kid. His grandparents who hailed from the Campobasso region of Italy and Taormina, Sicily, owned a butcher shop and grocery store in Collinwood. In 1965, they opened the White House in Mentor and in 1975 The Spaghetti Company in Mayfield. This is where Anthony began his now almost 30-year career in the food industry. In 1976, Cleveland’s iconic Ristorante Giovanni’s was opened by his grandparents and the rest, us Clevelanders can say, is history.

From that point on, Anthony’s father, Fritz Quagliata and uncles Carl and John Quagliata opened a myriad of restaurants in the greater Cleveland area. On his 12th birthday, Anthony was handed a dish rag and soap from his father – he got to work scrubbing dinnerware at The Spaghetti Company. At 16, he jumped on the line and learned to cook. At around 18, his family closed the Spaghetti Company and purchased The Holiday Inn Mayfield Village and opened Alfredo’s at the Inn. Eventually becoming the Executive Chef at Alfredo’s after college (where he studied marketing), Anthony spent much of his career here, but he wanted to take on more in the culinary world.

So, a few years ago he spent one year working in fine-dining at Giovanni’s gaining even more experience. Being from a strong entrepreneurial family, Anthony felt it was time to create his own concept and Artisan Anthony’s was born. Artisan Anthony’s is not your typical catering company. Yes, he offers a great variety of carry-out orders, corporate catering and caters parties and events, but his fast-casual catering concept also brings clients cooking classes, wine dinners, private in-home dinner parties, and more.

“What drives me in the industry is the creativity aspect of it. I’m always reinventing myself and my culinary ideas to stay current with food trends.” Anthony loves to take classic dishes and put his own spin on them. He also loves Asian dishes and flavors so finding ways to marry Asian and Italian concepts is a treat for him…and his clients! “I’m forever a student of the industry. I’m always learning, watching, reading to find new ingredients and flavors. You “gotta” have the bread and butter, but, at the end of the day, what keeps me going is creating exciting new dishes for my clients.” Although much of his time is spent crafting delicious meals, Anthony’s marketing degree doesn’t go unused. AQAMarketing offers logo and graphic design, screen printing, embroidery, print, and more for clients like the Cleveland Cavaliers, Cleveland Browns, Michael Symon’s restaurants, and many other corporations and small businesses. When Anthony isn’t in the kitchen or creating art, you can most likely find him at home with his wife, Gina, and their two young children, who also aren’t strangers to the kitchen. In fact, his 7-year-old daughter, Lyla, hosts some of his Instagram videos! Anthony has come a long way since starting a small catering company of mostly soups, breads and Stromboli.  Now, Artisan Anthony’s can cater anything from a small pop-up dinner to a corporate event. Whatever type of meal or event you are looking for,  Artisan Anthony’s will cook up something special.