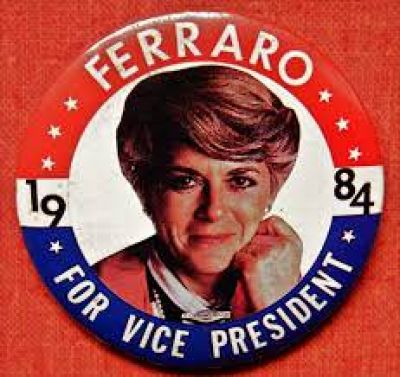 March is Women’s History Month. It is a time to reflect on and highlight the women, both past and present, who make or have made our world a better place. The organization that leads the commemorations for the month is the National Women’s History Project.

Founded in 1980 in Santa Rosa, CA, the NWHP recognizes and celebrates the diverse and historic accomplishments of women by providing informational services and educational and promotional materials. The group also selects a theme for women’s history month and names the honorees.

The theme for Women’s History Month 2018 is “Nevertheless She Persisted: Honoring Women Who Fight All Forms of Discrimination Against Women.” Among this year’s honorees is Geraldine Ferraro, who in 1984 became the first woman and first Italian American to be a vice presidential candidate.

Geraldine “Gerry” Ferraro (1935–2011) was the youngest of four and only daughter born to Antonetta Corrieri and Dominick Ferraro. Ferraro’s mother was born in America to Italian immigrant parents and worked as a seamstress. Her father was an Italian immigrant from Marcianise, Campania, Italy and owned two restaurants. After her father died of a heart attack in May 1944, the family fell on hard financial times and moved from Newburgh, NY, to a low-income area in the South Bronx.

Ferraro worked her way through college, graduating in 1956 with a Bachelor of Arts in English. She then became a public school teacher in Astoria, Queens. In 1960, she earned her Juris Doctorate from Fordham University and was admitted to the bar in 1961. Ferraro was one of only two women in her graduating class.
Ferraro was elected to the U.S. House of Representatives in 1978 after serving four years in the Queens County District Attorney’s Office. She quickly became a person of note in the Democratic Party by advocating for legislation to bring equality for women in the areas of wages, pensions and retirement plans.

In the 1984 presidential election, Walter Mondale chose Geraldine Ferraro to be his running mate on the Democratic ticket. During her acceptance speech at the convention, Ferraro acknowledged and stressed the significance of her selection. She said, “The daughter of an immigrant from Italy has been chosen to run for vice president in the new land my father came to love.”

Mondale and Ferraro were defeated by Reagan and Bush, but Ferraro’s career as a public servant was not over. Under the Clinton administration, she served as a U.S. Ambassador to the United Nations Commission on Human Rights. She also served on Hilary Clinton’s 2008 presidential campaign.