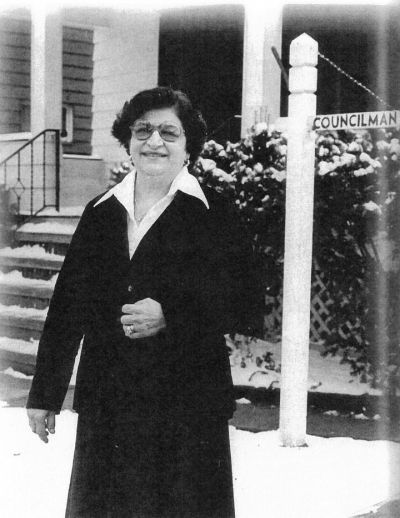 March is Women’s History Month, making it an appropriate time to remember local Italian American women who have made their marks on our community of Greater Cleveland.

Mary Zone (1919-2005) was the first Italian American woman to serve on Cleveland City Council, representing the Detroit-Shoreway area on the city’s West Side and becoming the legislative body’s majority whip.

She was appointed to the seat by Council President George Forbes to complete the term of her husband Michael Zone who died in office in 1974. When accepting the appointment, Mary told a gathering of supporters, “The love that I have for my husband will drive me with even more determination.” Mary continued to serve until 1981.

One of her first projects was to establish an emergency medical service in the city. It had taken nearly an hour for help to arrive at her home on West 61st St. when Michael was suffering a fatal heart attack. Mary sponsored and introduced legislation for a dedicated, around-the-clock emergency service. On October 13, 1975, Cleveland EMS responded to its first call.

Besides her legislative duties, Mary was the deputy director of the Ohio Lottery Commission, an officer of the city’s Landbank, vice chair of the Cuyahoga County Democratic Executive Committee, and board member of the Cuyahoga Women’s Political Caucus. She also managed a number of state and local political campaigns.

Mary’s work brought her many awards and accolades. She was one of the first women to receive the Cuyahoga Women’s Political Caucuses’ Political Achievement Award, was named to the Cleveland Magazine/Women’s City Club List of 100 Most Influential Women and was given the Father Frascatti Neighborhood Champion Award from the Detroit-Shoreway Community Development Organization.

Mary was a lifelong resident of the Detroit-Shoreway neighborhood. She and Michael were founding members of Our Lady of Mt. Carmel Catholic Church and they worked for the betterment of the parish with as much passion as they did for the community.

Mary’s Italian immigrant parents, Michael Constantino and Carmella Perrotta, first settled in Brooklyn, New York, before coming to Cleveland in the early 1900s. Mary and Michael grew up across the street from each other. They were married in 1944 and raised nine children. In addition to being partners in politics, they operated two neighborhood businesses; Zone Foods and Zone Travel Agency.

All the titles and accolades Mary gathered over the years hardly tell the story of the dedication, love and selflessness she gave to her family, her church and her community. As stated in a program from one of the many community awards she received, “Mary Zone cares – deeply and strongly! She believes in us and in our neighborhoods!”

Mary deserves to be honored and remembered during Women’s History Month not only for what she accomplished for her neighbors and her city, but also because she did it with passion and purity of intent.