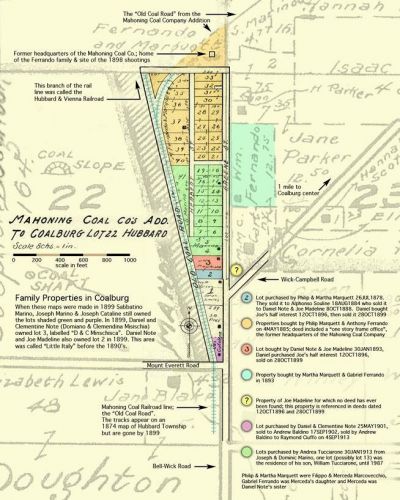 Joe Tucciarone contributes this important piece of Italian Americana as an independent document researcher engaged in recording the history of his hometown of Hubbard, OH. Additionally, he is a descendant of Merceda Misischia, wife of one of the original Italians who arrived in Coalburg, OH, in 1873.

On March 5, 1857, the Portage Sentinel announced the discovery of a fossil on Hugh Love’s farm in what would soon become the Village of Coalburg. Located in the northwestern corner of Hubbard Township, the site was not known as a source of ancient relics. Yet a team of men had unearthed a six-pound tooth “of huge antiquity” there. The ﬁnd was accidental, for the men were not searching for fossils. They were opening a coal mine. The quality of this coal was proclaimed to be “second to none” and would propel Coalburg into the Industrial Age. It would also pave the way for the arrival of the ﬁrst Italians in Hubbard Township, and possibly in all of Trumbull and Mahoning Counties.

By February of 1862, coal had been found throughout the area. By 1866, almost 1,000 tons of coal were being hauled out of the Hubbard and Coalburg mines every day. On July 7 of that year, William Bonnell, Abram K. Price and Joseph G. Butler met at Nathaniel Mitchell’s hotel in Hubbard. There they announced the incorporation of the Mineral Railroad Company for the purpose of mining and shipping coal. In 1869, the editor of the Warren Western Reserve Chronicle wrote about Coalburg:
Things are going off in a very business-like way, in this little village. The banks in the vicinity are daily responding to the miners’ pick, and sending out their treasures. The neighing of the iron horse is heard several times a day, and its’ groaning too, as it bears away its goodly burden of ﬁne, black coal.

The optimism for the coal business disappeared when the miners and mine owners fought over wages. At the end of January 1873, thousands of miners struck, stopping the deliveries of coal and bringing the local steel and iron industries to a virtual standstill.
Meanwhile, NYC was facing a crisis of a different sort. In December of 1872, hundreds of poor Italian immigrants were arriving every week. Most of them were penniless and had nowhere to go. Fortunately, the Commissioners of Emigration operated a Labor Exchange equipped with a telegraph. Employers from any location in the country could instantly receive telegrams detailing the availability of immigrant laborers.

In March of 1873, the Mahoning Coal Company took advantage of this service. One month later, the Canton Repository stated that the mine owners had decided to import from NYC, destitute Italian immigrants who were being lodged at the city’s expense on Wards Island. As a result of an agreement worked out between the Mahoning Coal Company and New York immigration ofﬁcials, on March 19, 100 Italian immigrants hired to work as strikebreakers arrived by train in Coalburg. They joined African Americans brought in from Virginia for the same purpose.

The Italians were barracked on 25 acres of land belonging to the Mahoning Coal Company. The Mahoning Vindicator printed a story about the new residents:
At a miner’s boarding house, at Coalburg, at which nine boarders were kept, those nine ate, in one week, 140 lbs. meat, 69 loaves bread, 180 eggs, 18 lbs. ham, 22 lbs. sugar, 5 lbs. rice, 3 bushels potatoes, 100 pickles, washing all this down with 21 lbs. of coffee. These boarders were of the imported miners from New York. It is probable, from the foregoing exhibit, that they never had enough to eat, before, in all their lives.

The importation of immigrant workers angered the miners who reacted with violence. The Italians suffered threats and abuse, while buildings belonging to the Mahoning Coal Company were burned. A reporter from the Warren Western Reserve Chronicle asked one old miner what would happen to anyone who deﬁed the strikers. “‘We will kill every miner who don’t go with us.’ And he slammed his begrimed old hand down on an empty beer barrel.”

On May 12, 1873, an additional 95 Italians were brought to Ohio from New York. This group was sent to work in the Church Hill mines a few miles west of Coalburg. This second importation renewed the burnings and attacks by the striking miners. One immigrant, Giovanni Chiesa, was murdered at a mining camp in Church Hill.

Originally, there were plans to import 1,000 Italians but it never came to that. By the summer of 1873, the strike had begun to falter and some of the old miners returned to their jobs.
Hard times followed quickly. In September of the same year, the U.S. economy entered a deep recession known as the Panic of 1873. The recession affected all industries, including coal mining. A reporter for a Cleveland newspaper was sent to Hubbard to chronicle the effects of the crisis. He observed “. . . scores of men, mostly Italians, wandering from house to house seeking work and food . . .”

By the late 1870s, most of the mines in Coalburg had been exhausted. As local mining began its steep decline, some of the Italians left the village. Still the 1880 census showed that some had remained and were living near the abandoned mines. Among them were the Marcovecchios, Carosellas, Dominics, Misischias, Jackamos, Sabbatinos, and Ferrandos. They had begun buying their old mining barracks and had established a colony that was known as “Little Italy.”

As more jobs disappeared in the succeeding decades, Coalburg reverted to its original state as a farming community. Most of the Italian immigrants drifted away, settling in Hubbard and Youngstown.
Today, the sounds of picks and shovels in Coalburg are long gone, as are many of the Italian families. Although the mining boom is now far beyond living memory, the legacy of the events of 1873 is manifest in the many descendants of those ﬁrst Italian immigrants, scattered throughout Trumbull and Mahoning counties.