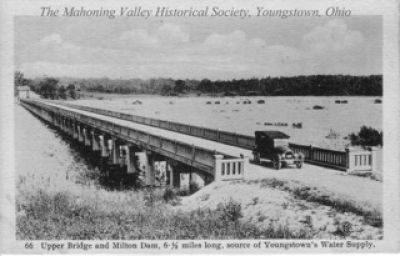 Debt and death often plagued early Italian immigrants at their worksites in the Mahoning Valley. Newspaper clippings from 1873 record the first arrivals as pick-and-shovel coalminers in Coalburg, Trumbull County, OH. That same year, the Youngstown Evening Vindicator reported that the Italians had been recruited in NYC and from East Coast seaports, and sent with African Americans to Coalburg, to break a strike called there by the miners’ union. In July, miners at the nearby Church Hill mines murdered Giovanni Chiesa, an Italian strikebreaker.

Concurrently, unskilled immigrant men were often caught up in the padrone system as quarrymen or as rail builders. Under the corrupt scheme, those wishing to leave Italy signed burdensome contracts and loans that put them under the effective control of exploitive Italian padroni, or labor contractors. Once on U.S. soil, the indebted workers were virtually indentured servants who spent years repaying credit taken on in Italy. Whether in the mines, in the quarries, or on the construction lines of the nation’s expanding rail network, work often meant danger and oppression.

On the other hand, the achievements of immigrant Louis Adovasio rose above the constraints and difficulties faced by many newly landed Italians of the early era. He became a highly successful Mahoning Valley building contractor, most notably undertaking the construction of the massive Milton Dam and Reservoir. Moreover, Adovasio's success signals the start of Italians coming into their own, as skilled workers and then as successful business people who commanded the admiration of the wider, English-speaking community of the Mahoning Valley. 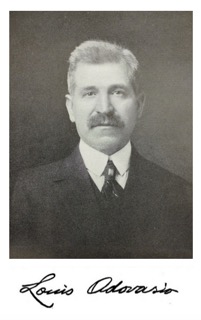 Louis (Luigi) Adovasio, born in 1860, in Montelongo in Campobasso, experienced the chaos that followed the Unification of Italy. Widespread poverty broke out in the country’s South during the 1870s. With the general impoverishment also came a southern peasant revolt that devolved into widespread banditry. Italian troops shot outlaws and innocents alike. To these troubles were soon added the disastrous tariff war with France and the arrival of the grapevine-killing phylloxera disease. Thus, many in Southern Italy were looking to places like Northeast Ohio, booming with growing industries, as a way out of poverty. Letters arriving from America most likely reported the harsh conditions of the transatlantic voyage and the drudgery of manual labor in the new country, but other letters surely spoke of opportunities for skilled workers such as stonemasons and bricklayers, much in demand in the U.S. who could more easily avoid the indebtedness of the padrone system.

After having served three years in the Italian Army as a building contractor and engineer, Adovasio struck out for Youngstown in 1890. The new immigrant found employment early on as a stonemason with Christian Mauser, a successful Youngstown contractor, who eventually appointed Adovasio as his building superintendent. In 1897, he left Mauser and began his own construction firm. A short list of the contractor’s completed projects includes: the Milton Dam, Immaculate Conception School, Niles High School, the McKinley School, the West Federal Street YMCA, the Niles Carnegie Library, the Mahoning County Jail, additions to Boardman High School and Westminster Presbyterian Church, assorted bank buildings, and many stately homes. Though many of these are gone, they held the public’s attention. As one of the area’s leading businessmen, Louis Adovasio supported the Youngstown immigrant community. Our Lady of Mount Carmel Basilica counts him as one of its founders.

Clearly, the most awesome feat Louis Adovasio achieved was building the Milton Dam and Reservoir, in association with subcontractors Vincenzo Mango and Giuseppe Galdini. By the early 1900s, with new steel mills and an exploding population, Youngstown was facing a water crisis, or as the Youngstown Vindicator reported, a "water famine." In 1910, the city’s residents and industries were using 50 percent more water than just 10 years previous. The year 1913 saw the untamed Mahoning River ravage downtown Youngstown and halt steel production. Other years, the river nearly disappeared because of droughts, a persistent threat to a steel industry that required massive amounts of water for its cooling vats. Nearby, river town Niles suffered two typhoid epidemics. Downstream at the Youngstown municipal intake, the infectious Mahoning River was already deemed, in 1910, too contaminated to continue to supply the city's drinking water.

Who could harness the Mahoning for sustainable development? Outbidding his competitors, Louis Adovasio’s firm constructed a huge water project whose importance changed local history.  Completed in 1917, the Milton Dam and its reservoir would soon hold ten billion gallons of water from the clean, upstream Mahoning and its tributaries. Health and industry were saved thanks to the efforts of the Italian who had domesticated the wild, threatening river. Eventually, the Meander Creek Reservoir would provide potable water for the area, but Adovasio’s was the first massive dam in the Mahoning River watershed.

Lastly and importantly, Louis Adovasio forged a new self-awareness for Italians, a pride in “Italianness”. Stefano Luconi, noted scholar of Italian immigration, remarks that when immigrants first began to arrive in the U.S., they identified themselves not as Italians but as members of their own villages and towns, as paesani not as italiani. They possessed little sense of national unity, so necessary to confront negative stereotypes and outright discrimination. Against these deep divisions, Luconi continues, the prominenti, or acknowledged leaders, forged a positive Italian national image that represented all the regions of Italy.

Both to the general public and to the immigrant community, Adovasio was known as a highly successful Italian. This new identity united the Italian community in its struggle to advance in the U.S. Thus, by the time of Adovasio’s 1945 death, the memory of the difficult early period was fading, as proud Italians in the Greater Mahoning Valley contributed to an economy built on the participation of free laborers and successful business people. If Youngstowners of 1917 doubted the contributions of Italians to the area’s development, all they needed to do was to turn on the tap and enjoy a glass of clean water.