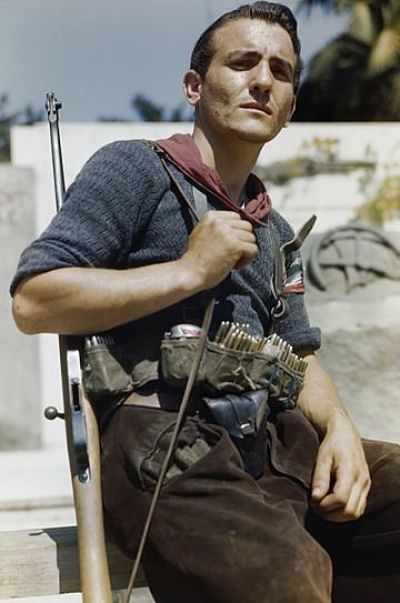 Bella Ciao or “Goodbye Beautiful” is a 19th century Italian protest song that has its origin in the struggle of Italian women from the north of Italy who labored in the rice fields there.

The Mondina (from mondare, to clean) women worked in the rice paddies crouched over for hours barefoot in water up to their knees. Lavore “monda” è l’estirpazione delle erbe infestanti dalle risaie or “the eradication of weeds from rice fields.” Abhorrent working conditions, long hours and low pay led to constant dissatisfaction and rebellious movements and riots in the early 1900s. The original version, “Alla mattina appena alzata,” written in 1906 by an unknown author and sung by the Mondina women while working, was an outlet for their resentment against the supervising and often cruel padroni.

One of the most famous recordings of Bella Ciao was Italian singer Giovanna Daffini’s 1962 folksy rendition. She was associated with the Nuovo Canzoniere Italiano movement, a left ideological political-cultural movement.

From 1943-1945 the lyrics of Bella Ciao were modified and sung by the anti-fascist Italian Resistance, partigiani against Mussolini and the Nazi German forces occupying Italy and again in their struggle against the Italian Social Republic and its German allies during Italy’s Civil War.

Bella Ciao has become an anthem for anti-fascist movements worldwide and versions have been used in revolutionary events in Spain, Greece, Tunisia, Puerto Rico, and more recently in the protests in Palestine against Trump’s failed “Deal of the Century."

In 2012, for a Belgian event “Sing for the Climate,” the melody of Bella Ciao was used with adapted lyrics as a worldwide environmental activist song. "Do it Now" demands political action against global warming and calls us all to “wake up, build a better future and start right now!”

In 2015, the song was banned in some municipalities of Northern Italy ruled by the right-wing Lega Nord.

Bella Ciao became a hit in 2017, mostly due to the popularity of the Spanish TV show, “La Casa de Papel,” or Money Heist. Its writer, aware of the song's meaning and history, featured it extensively throughout the series, since the life of El Profesor, the main character in the show, revolved around the idea of resistance.

In 2020, as the Coronavirus tightened its grip on Italy, neighbors across Italy played music together on their balconies and found connection amidst the pandemic. Daniele Vitale, a renowned Italian Saxophonist, played a memorable rendition of Bella Ciao joined by others on their balconies to sing along.

Other European countries used Bella Ciao to show their solidarity with Italy and with their own countrymen. The people of the Bavarian town of Bamberg, Germany took to their rooftops and windows to sing Bella Ciao when the Italian death toll from the coronavirus outbreak continued to rise. Kurdish musicians prepared a video clip using the song to show their solidarity and a Turkish orchestra transformed Bella Ciao into an anti-coronavirus Stay-at-Home song.

Bella Ciao began as a native folk song, gained international recognition and rose to become a universal anthem of resistance. It has been played by orchestras, sung by children, Indian rappers, UK fireman, and many more, some with their own lyrics, some with none, but all with the same infectious melody that once heard, is never forgotten. Versions of Bella Ciao are available on the internet and while each is unique, they have one thing in common—passione!