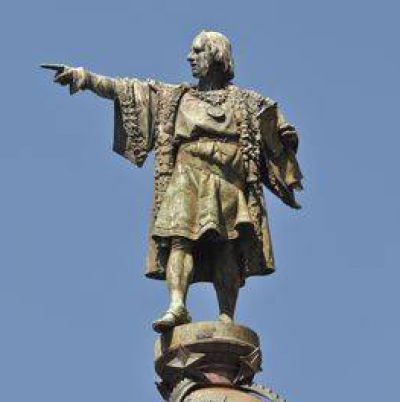 The evil that men do lives after them, the good is oft interred with their bones. It is so easy to attack the dead, to misquote, to misrepresent motive, to manipulate the representation of past events. When the dead lack someone to speak for them they can easily become the victims of those more interested in promoting a cause than the truth. While it is not at all shocking that Christopher Columbus should be attacked by socialist historians with an agenda to tear down icons of American history, it is even less surprising that such libel has resonance in a populace that is all too willing and all too poorly informed.

In the case of Columbus, let me be his voice. In this first of three articles, I would like to discuss Christopher Columbus, exploring why he is worthy of veneration on not just the part of Italian Americans, but of all Americans. In the next, I would like to explore the case against Columbus. I will examine the historical record to understand which accusations have merit, and which do not. Finally, I will conclude with what should be the final judgment of history. Let us, therefore, begin by considering who Columbus was.

Columbus was born into a world where the threat of a Muslim invasion was a very real, substantive existential threat. That phrase, existential threat, has become so overused that it verges on the loss of meaning, but it well describes the battle between Christianity and Islam in the 15th century. The people of that age genuinely believed that a Muslim conquest of Europe would mean not only the end of Christianity but the destruction of Western civilization. A fear that was amplified by the fall of Constantinople in 1453.

The Muslim victory shook all of Europe. In addition to the City’s importance for trade with the East, Constantinople was of great religious significance. Pope Pius II described the defeat as “the loss of one of the two eyes of the church.” It was home to many Holy Christian relics and a major milestone for pilgrims on the way to the Holy Land. In the minds of the Christians at that time, Constantinople in Muslim hands was a clear indication that the end was nigh. The stage was being set. Christ would soon return, defeat the enemies of the Holy Catholic Church, and establish a kingdom that would have no end. For Christ to return, however, Jerusalem must be back in Christian hands and the temple rebuilt.

While some of us may scoff at such thinking, this is what people in the 15th century believed, as convinced of these truths as the sun rising in the east. One such person was Columbus himself who saw the world through the lens of scripture, a common outlook at that time. Nothing was mere chance, everything was part of God’s plan, including him being named Christopher. His namesake, Saint Christopher, is said to have carried a child across a river. Once on the other side, the child revealed himself to be Christ. This is how Columbus saw himself as a Christopher, a Christ Bearer. He believed God’s purpose for his life was to bring the Gospel of Christ to Asia and the Great Kahn whose aid Columbus hoped would evict the Muslims from Jerusalem. This is what motivated Columbus, what drove him. It was not a lust for power and riches as asserted by his detractors. He was a man of faith who hoped to be an instrument of God.

Howard Zinn, the chief critic of Columbus and catalyst for all of this Columbus bashing, writes in “A People’s History of the United States” that “Spain sought gold, which was becoming the new mark of wealth, more useful than land because it could buy anything.” Putting aside for a moment the ludicrous comment that gold was the new mark of wealth, he attempts to characterize Columbus and the Spanish royalty as driven by greed. This was not the case. The need for gold was necessary to fund the Crusades. While the Crusades have become another target of derision, the motivation was a defense of Western Civilization. It was not driven by a lust for accumulating ever more wealth.

In addition to being a man of great faith, Columbus was also a man of great courage. In the modern age, travel between Europe and the Americas has become so mundane that we fail to appreciate the bravery required for such an undertaking. They were sailing into the unknown, setting out on a huge ocean in small ships. They had no real idea of what they would encounter. Many authors such as the Romans Pliny and Saint Augustine populated the unknown regions of the world with monstrous creatures that were said to be descendants of Cain who had cursed God. At the same time, Columbus was told that a western route to Asia was impossible, the ocean too vast. More importantly, in 1487, two Portuguese explorers set off into the west and were never heard from again, giving support to the doubters. Despite the naysayers, despite the seeming impossibility of the task, despite a crew that at times threatened mutiny, Columbus dared to persevere. He held on to his beliefs and in so doing opened an entirely new world.

Just as critics overlook his faith and dismiss his courage, they also denigrate his skill as a sailor and navigator. You will hear his detractors - lesser men who criticize the greatness they are unable to achieve - snicker, saying that he was lost when he bungled his way into the Americas. Hans Koning, a historian who inspired Howard Zinn, wrote; “Columbus was probably short, uneducated, intellectually unsophisticated, poor at navigation, and a thief of others’ ideas.” This could not be further from the truth. Daniel Boorstin, who graduated from Harvard summa cum laude, a Rhodes Scholar, and the 12th Librarian of the United States Congress, held a significantly different opinion. In his work “The Discoverers,” Boorstin takes an entire chapter to extoll Columbus’s skill as both a sailor and navigator. As Boorstin notes, mariners were referred to as sailors because they were “men of the sail.” He goes on to say that “For the skillful mariner, the Columbus, the winds were the mystery he had to master.” Columbus did just this. Boorstin points out modern sailors agree that even after 500 years sailing vessels could not do better than to follow Columbus’s route. Boorstin concludes saying “he was a knowledgeable master of the winds, which would make it possible for others to follow him.” These abilities were coupled with his talent as a navigator. Boorstin also notes that Columbus’s skills as a navigator were not “the least remarkable, though least celebrated,” especially in an age when celestial navigation was still rudimentary.

Who was Christopher Columbus? He was a man of great faith and courage, a visionary, a skilled sailor and navigator. He is a man worthy of admiration.