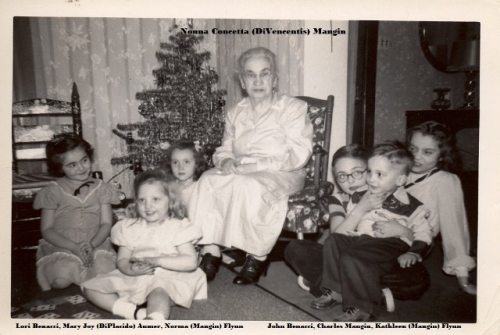 My most treasured memory dates back to December, 1946. It was this Christmas season that I met my grandparents for the first time.

At the time, I was serving in the U.S. Navy and was aboard a ship in the Northern Adriatic, as part of the Allied Naval Occupational Forces. Italy was slowly recovering from a long, dreadful war. Many of the highways, railways and bridges were still severely damaged, and travel was restricted. Knowing that my grandparents lived in Lucca, a distance of approximately 300 miles, I was determined to find a way to visit them, and spend Christmas Day with them.

After several requests to various commanding officers, I was given a five-day leave, only because I could fluently speak Italian. Now that I was granted the leave, my next problem was how to get to Lucca. Most of the transportation systems were not readily available, so at 5 p.m. on December 21, a cold and blustery night, I departed from my ship at Venice and started to hitchhike in a southwesterly direction, hoping for the best.

My efforts paid off as I traveled by armored British vehicle, ferried across the Po River, walked several miles, rode on a train, and finally at 6 a.m. the following day I arrived in Lucca.

My next challenge was to locate my relatives. When I was growing up, my parents, who were born and raised in the Lucca area, always talked about the Quattro Murri, meaning the four walls. I inquired about transportation to that area and was told to take a trolley, which I did, and the conductor informed me when I arrived there.

As I got off the trolley, I noticed that I was out in the country at what seemed to be an intersection. Only two of the four walls were remaining. My next decision was to select which of the four roads I should take. I decided to take the one going up the hill as I could see a home with lights in the distance. The time was now about 8 a.m. and after about 1000 feet up the hilly road, I noticed an elderly gentleman with a cane coming down the hill. As we met, we greeted, and I asked if he knew where the Bernacchi's or Lucianis lived.

He looked at me strangely and asked in Italian, "Who are you?" I identified myself and told him who my parents were. He dropped the cane, threw his arms around me and told me he was my dad's schoolmate and closest friend. He then personally escorted me to the Bernacchi home up the road, where I was greeted by uncles, aunts and cousins.

The festivities started almost immediately, and for two hectic days in a simple and humble fashion, I was treated like a king. But the best was saved for Christmas Eve and Christmas Day, for it was then that I was able for the very first time to meet my maternal grandparents, the Lucianis. Needless to say, it was an emotional and joyous reunion. The celebration started with Midnight Mass at the family church, followed by a family reunion on Christmas Day.

December 26 came too soon, for I was again traveling through the countryside returning to my ship. Yes, a dream had come true. This was to become my most treasured Christmas memory.