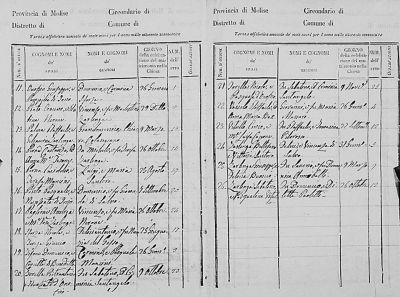 Roslyn was able to quickly track down the date of her paternal grandparents' marriage (Nicola Torella and Pasquala D'Onofrio) by searching the indexes of the years before their first known child was born. In this 1863 marriage index for the village of Pietrabbondante, Italy, the marriages are arranged by groom's surname and show the name of the bride, the names of the groom's parents, the day and month of the marriage, and the record number.

This month we are exploring Italian civil marriage records. Of all the civil records available, it is my opinion that these can be the most challenging to research and translate. However, they are also very valuable in terms of the genealogical information you can obtain from them. Like the other civil records we have explored, marriage records date back to the reign of Napoleon and can begin as early as 1809 in some communities. Generally, you will find the names of the groom and bride, their ages, occupations, town of residence, date of marriage, previous marriage status, and sometimes the names of their parents and grandparents. The records are kept in annual volumes and, in many cases, an index at the end with the names of the bride and groom. There are four main types of Italian civil marriage records which are discussed below. These records will likely be recorded in separate volumes. What actual records will be available will vary based on the location of the marriage and the timeframe of when the event took place. Marriage records can be found online at http://www.antenati.san.beniculturali.it/?lang=en or at your local Family History Center https://www.familysearch.org/locations/.

Atto di Pubblicaizioni or Atto di Notificazioni
In Italy, the law required that a notification about the upcoming marriage was to be posted on the door of the town hall and publicly announced on two consecutive Sundays in order to allow persons to make known any objections or impediments to the marriage. We know these in our vernacular as “marriage banns.” The announcement was usually made by the priest in church. If the bride and groom were from different towns, the documents would be posted in both places. Sometimes you will locate one of these records but never find the record to show that the marriage took place, most likely meaning there was an impediment discovered to the marriage and the marriage was called off.

Atto di Solenne Promessa di Celebrare il Matrimonio
Typically, the next step in the marriage process, after the banns were completed, was to make a “solemn promise” to marry. The promise was recorded at the city hall and required witnesses. Like the marriage banns, it would be posted on the door of the town hall, but just once before the couple was eligible to marry. These records are generally handwritten which makes them difficult to read and translate and will be in a bound volume.

Atto di Matrimonio
This document can be thought of as the equivalent to our “marriage certificate.” It establishes that the couple did marry. Fortunately, these are generally recorded on pre-printed forms making them the easiest of all marriage records to read and translate. I recommend you search for this record first. Once you know the date of the marriage, you can approximate the dates of when the banns and the promise documents were created. If you do not know when your ancestors’ marriage took place, you can try searching for the year or two before the birth of their first child. If the marriage was a first marriage, the minimum age requirements were age 14 for males and age 12 for females under the Kingdom of the Two Sicilies beginning in 1819 and then it changed in 1865 to age 18 for males and age 15 for females. These are general guidelines and there can be exceptions to permit marriage at a younger age, particularly if there was a baby on the way. If the couple were from different villages, start your search in the bride’s village.

Allegati di Matrimonio or Processetti di Matrimonio
These are supplemental documents that were required in order to allow a couple to marry and can be a gold mine for your genealogy search. These records were presented to prove age, marital status and consent. In Italy, parental consent to marry was required for males before the age of 25 and for females before the age of 21. Within these handwritten records, you will find extracts of birth and baptismal records to establish age and death record extracts for parents who were deceased and could not provide consent. Occasionally, if a father was deceased, there may be an extract for the death of a paternal or maternal grandfather because the grandparent would be the next in line to offer consent to the marriage. If there was a previous spouse who died, a death extract would be included in the supplemental documents as the widow or widower had to prove she or he was free to marry again. Notably, you will not find any divorce records as divorce was not legal in Italy until 1970. These records are usually handwritten. If you are researching a marriage that took place in the early 1800s, these records may be a great help to take your research back an additional generation or two and help document an ancestor who was born or died before the 1809 Napoleonic record keeping practices. Next month we will do a deep dive into translating a marriage record. Happy ancestor hunting!