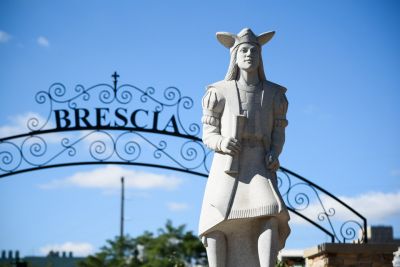 This year, La Gazzetta Italiana is excited to feature Little Italy’s all over the country. And where better place to start than in our hometown of Cleveland!

Cleveland’s Little Italy centers around the historic section of Mayfield Rd. and Murray Hill. It is said that in the mid-1800s, Italian sculptor Giuseppe Carabelli began his famous granite and marble works at the top of the “hill” on Mayfield Rd. This area became home to many Italian immigrants and Little Italy was born.

In 1906, Angelo Vitantonio, a resident of Cleveland’s Murry Hill neighborhood, patented the first “official” pasta machine. By 1911, it was estimated that 96% of the inhabitants of this area were Italian-born and another 2% were of Italian parents. Tony Brush Park was dedicated in 1993 for the champion boxer and Little Italy resident Anthony Brescia.

Today, Little Italy draws thousands of visitors each year to its trendy art and dining experiences. Local organizations work to actively promote the Italian heritage and protect the cultural identity of the neighborhood. Cleveland’s Little Italy is truly an old-world neighborhood hosting many cultural events throughout the year; perhaps the most popular being the Feast of the Assumption each year in August.  The Columbus Day parade in October and the Taste of Little Italy in September draw thousands. Little Italy’s three Art Walks in June, October and December have been going on for over 30 years. And, while many Little Italy’s host bocce tournaments, Cleveland adds an additional bit of beauty and fun with Notte Bianca when restaurants and galleries light up the late-night skies giving visitors the chance to shop, wine and dine at some of the best local Italian restaurants around.

One of Cleveland’s most enduring ethnic neighborhoods, Little Italy is the epitome of Italian American culture.