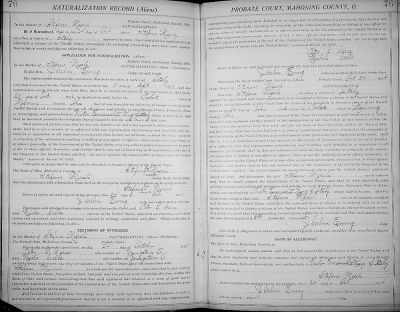 A 1904 Petition for Naturalization for Stefano Miceli of the Youngstown, Ohio area shows that he arrived in the US on September 5, 1896, filed a declaration to become a citizen on October 2, 1902 and was granted citizenship on October 24, 1904 in Mahoning County’s Probate Court.

Last month we looked at ship manifests; this month we will explore U.S. immigration records. We are focusing on immigration records created in the late 1880s through 1956 because it was during this period many Italian immigrants became U.S. citizens. First, to help narrow down when your ancestors became naturalized citizens (if you do not already know), look to the U.S. Census. Records for the years 1900, 1910, 1920, and 1930 have a column that captured citizenship status and the 1920 Census captured the year of naturalization. Fortunately, Census records have been digitized and can be viewed online at www.familysearch.org or if you have a subscription, you can view them at www.ancestry.com or www.fold3.com. (Tip: Your local library may have subscriptions to genealogy sites allowing you to access the sites for free from the library’s computers).

For an ancestor who became a citizen before 1906, he or she would have filed an intent (known as “first papers”) with the local court where he or she was domiciled. After meeting a five-year U.S. residency requirement, the applicant could then complete a petition (known as “second papers” or “final papers”). There were no standard forms for the naturalization process prior to 1906, as each local court had the latitude to use their own forms. Therefore, the genealogical value of records will vary amongst locations. You will most likely find these records in the archives of county court houses, not at a federal government archive. Additionally, you may have to check more than one place if your ancestor moved between the times when they filed their intent and when they filed their final papers (the census records may help you trace all the places your ancestor lived). The Church of Latter Day Saints (LDS) has digitized many of these early records and you can search their free site via the internet at www.familysearch.org. Or, if you prefer assistance from a volunteer, visit the LDS Church’s local Family History Center (find your local FHC at www.familysearch.org). You might find records at www.ancestry.com or www.fold3.com too.

Beginning in 1906, the naturalization process was federalized, standard forms were required and records were kept at the local court with a duplicate sent to the Federal Naturalization Service (now USCIS). From 1906-1952, an applicant filed a Declaration of Intent. Then, after a period of 2 to 7 years, the applicant filed their Petition for Naturalization with the court and provided two witnesses who testified that the applicant had been in the U.S. for at least five years. Some of these records are available online at www.familysearch.com, www.ancestry.com or www.fold3.com, but most (1906-1956) are located at a National Archives Records Administration (NARA) facility or the United States Citizenship and Immigration Services (USCIS). These records are not digitized and to access them you need either to visit a NARA facility or write for the records. You can find information about available records at www.archives.gov or www.USCIS.gov.

Some applicants may not have filed two sets of papers or filed any papers at all. If your ancestor became a naturalized citizen after 1952, he or she did not have to file “first papers” and would have just filed a petition. There were other ways to become naturalized citizens without filing first and second papers. For instance, if an immigrant served in the U.S. military, the Declaration of Intent was not required. During WWI, naturalizations were done at military bases! For wives and minor children of a naturalized citizen (who became a U.S. Citizen prior to 1922), they were not required to file separate intents or petitions as they were granted citizenship based on their male relative’s application. This is called derivative citizenship. Interestingly, a U.S.-born woman who married a non-citizen between 1907 and 1922 actually lost her U.S. Citizenship until the law changed in 1922.

What if your ancestor was not a U.S. citizen? There may be other immigration records to investigate. If your ancestor arrived after June 25, 1906, a Certificate of Arrival was completed at the port of entry and sent to the local naturalization court and may be found there or at www.familysearch.org. If your ancestor was alive in the 1940s, he or she would have been required to register annually as an alien under the provisions of the Alien Registration Act of 1940.  The Alien Registration (AR-2) is the form and may be found at NARA or USCIS. Next month we’ll explore more records to help you piece together your ancestor’s story!

Tweet
More in this category: « Prati di Tivo and the Smell of Mushrooms Discovering La Famiglia - Finding Your Family in U.S. Census Records »