Prati di Tivo and the Smell of Mushrooms 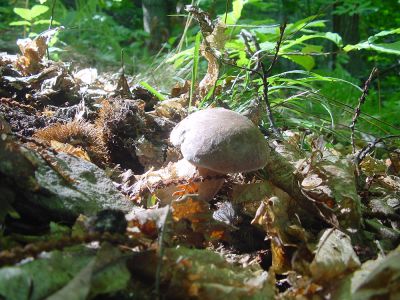 The scenery upon arriving at Prati di Tivo was dreamlike. The first thing to see was the “Sleeping Giant,” as the mountain of the Gran Sasso d’Italia is called because it looks like the giant profile of a person resting. There was a wicker swing shaped like an egg tied to a tree. A house on two floors with wooden windows that had small engraved hearts looked out over a stream. To get to this house immersed in the woods of the Prati di Tivo, you had to walk along a narrow path surrounded by trees; at times it was difficult to continue by car so someone would get off and walk the rest of the road. Immersed in that forest, a fantastic story seemed to live. The natural scenery, the scents of elk and moss mixed with frost and mushrooms stunned us and made us protagonists of natural stories. We kids were happy to spend the last summer vacation days there before school would resume. Sometimes we would be awakened in the morning by wild horses and squirrels approaching the windows where warm sunshine filtered into the house. It was also the last few days to stock up on mushrooms for the winter. In the morning we would leave very early, first heading to the areas well-known for picking mushrooms and, if there were none there, we would move on to new locations. The important thing was the level of humidity in the ground. You could find porcini, galls, drumsticks, and other varieties if it had been raining the day before. My dad had taught us to inspect the mushrooms closely using a stick to see the color and the rings, but making sure not to touch the poisonous ones. He had told us that the most beautiful mushroom, called amanita falloide, was the most dangerous of all and that if we saw some during our walks in the woods we had to tell him so that he could destroy it before someone would make the mistake of picking it. Once back home in the evening, we would shower, do our homework, dine all together, and then prepare for long walks. We would gather with the others in the square near “Bay of the King,” an inn where the adults would get a coffee and the kids could enjoy gelato or candies before leaving. Then, we would start walking around the woods until we reached the “Miramonti.” There were no street lamps so we kids would hunt for fireflies to put in glass containers to light up the street in front of us. The smell of mushrooms reminds me of my home. Indeed, during the month of September, mushrooms were scattered around in the garden area, in the kitchen and in the freezer. The galls and porcini were strung out to dry in the sun or placed under rice inside glass vases, while other varieties were sliced and placed in the freezer. In the winter my parents loved to use them in excellent risotto dishes or with homemade pappardelle.