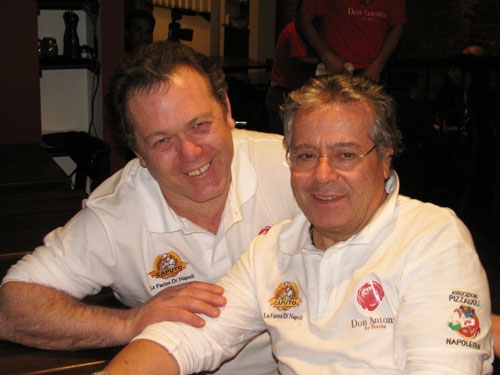 The United States represents a key market for Italian food. The importance of Made in Italy food products has always been characterized by the right ingredients imported directly from Italy's 20 regions. In fact, every region of the peninsula represents different culinary treasures of old traditions.

In the past 10 to 15 years, in the Italian food market in the United States, there has been a growing phenomenon of not just a product but a product that represents the history of an entire city and its territory. The movement of la pizza napoletana is in fact growing more and more popular throughout America. You can even call it "Pizza Napoletana Awareness," for there is an actual specialized professional category of the pizzaiolo napoletano or "Neapolitan pizza maker."

The word "pizza" is obviously a global term that is found on just about every menu worldwide, thanks to the simple, basic ingredients that are used to make it. Unfortunately though, the diffusion of this product is also subject to drastic changesânot always negative, however different than its original concept. Instead, the Neapolitan pizza, from Naples is characterized by ingredients that are hard to find anywhere else other than Naples. Thanks to the desire of the American people to discover the authenticity of this typical Neapolitan product, in a land where "American pizza" rules, there has been an immense spread of this movement in the United States.

What exactly are the main characteristics of an authentic pizza napoletana? There is an official document called "Disciplinare," which describes each, specific ingredient, how the pizza should be prepared and how it should be cooked and at what temperature. In February 2010, the European Union officially recognized this document and la pizza napoletana as a Specialità Tradizionale Garantita (STG) or rather "Traditional Specialty Guaranteed," a label which protects the product from imitation and demands that the typical characteristics of this product are respected. The basic ingredients of la piazza napoletana come from the land surrounding Naples, to summarize they are as follows: tender wheat flour type 0-00, which by the way renders the dough soft and sweet, pealed Roma tomatoes, extra virgin olive oil, and either fresh cow's milk cheese, fiordilatte or mozzarella di bufala D.O.P. In order to maintain the dough soft and the ingredients fresh, it is extremely important that the pizza does not cook for more than 60 to 90 seconds. Other than the ingredients, the Neapolitan pizza makers are sure to use only wood burning fireplaces, an ancient old tradition. In fact, it's not rare that the Neapolitan pizza makers in America import the word burning fireplaces from artisans in Naples that can guarantee their ovens reach 842ËF. The preparation of the dough, which is made with a specific procedure and ferment timing, the method in which the dough ball is rolled out, which guarantees a perfect texture and flavor, are all traditional, vital elements that a true Neapolitan pizza maker knows and must apply to the best of his ability.

The movement of authentic Neapolitan pizza is being developed in a large part of the United States. On the east coast, pizzerie such as A Mano in Ridgewood, New Jersey and Don Antonio by Starita and Kestè in New York City are examples of the pizza making passion of the renowned pizzaiolo napoletano, Roberto Caporuscio, who for over 15 years has been making la pizza napoletana. Naples native, Caporuscio, holds consulting and formation courses of authentic Neapolitan pizza making in New York City for aspiring authentic pizza makers. Always in the Big Apple, the pizzeria Forcella by Giulio Adriani is another example of expertise and passion for this movement. On the west coast, is a more interesting reality of a chain of pizzerie such as Tutta Bella in Seattle and Settebello located in Las Vegas and Salt Lake City. Futhermore, in Denver, Marco's by Mark Dym and in Chicago, Spaccanapoli by Jonathan Goldsmith all serve up the authentic pizza napolitana.

This movement is evidence of the beauty of the passion that Italians, especially Neapolitans, demonstrate and show appreciation to their culture and roots that render them famous globally, especially here America.

Tweet
More in this category: « The Vin Santo A Brief History of Italian Food in America »