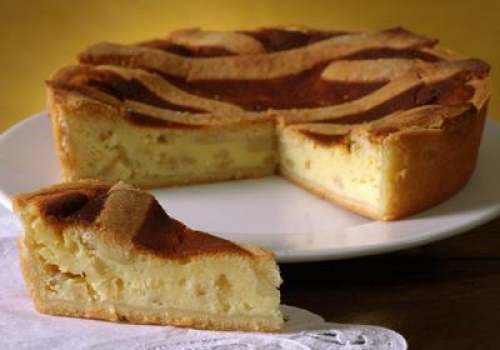 Italy is known throughout the world not only for its history, art, music and breathtaking landscapes but also for its delish dishes and deserts. For example, if you are lucky enough to visit the peninsula during the Easter period, you will find that Italy has a vast range of homemade, artisan products and even commercial products that all derive from traditional regional recipes. During Easter week, typical regional pastries can be found in any pastry shop. The most celebrated are probably the la pastiera, la colomba and il casatiello.

La pastiera is a Neapolitan desert symbolic of springtime. Made of a base of ricotta cheese, egg and sugar, it also contains two crucial ingredients that render its unique and unmistakable taste: orange flower water and cooked wheat. All of these ingredients are then poured into a base of pastry dough and then covered with strips of pastry dough, exactly like a pie in America.

Often, reality mixes with legends and folklore and this peculiarity alone renders Italy rich with magic. In fact, the history of la pastiera is tied to the legend of the Parthenope Mermaid. Legend has it that the Parthenope Mermaid would enliven the people of the Gulf of Naples with her sweet song. In return, to show thanks, the people of Naples offered the Mermaid the fruits of their fertile land: flour, which symbolizes the richness and strength from the peasants; ricotta, a gift from the pastors; eggs, a symbol of life; tender wheat boiled in milk, a symbol abundance; orange flower water to represent the perfume from the land; as well as other sweet spices and sugar from far away places in the Orient, symbols of her sweet sublime song.

Touched by the many gifts, in return, the Parthenope Mermaid returned to her kingdom deep in the abyss and presented her generous gifts at the feet of the gods. Fascinated by the gifts and by the song of the Parthenope Mermaid, the gods used their divine powers to mix all the ingredients that the Mermaid received. The result: la pastiera, a desert that exceeded the goodness and sweetness of the Mermaid herself. There is even an anecdote regarding this tasty desert.

King Ferdinand II married Maria Theresa of Austria, an astere woman who reigned with the nickname of "the queen who never smiles." Well, it is said, that one day, Maria Theresa gave in on a piece of pastiera, after Ferdinand insisted, and as soon as she tasted it, her face was quickly with illuminated with a smile. The King then declared that "la pastiera is the only way to make Maria Theresa smile and now I have to wait till next Easter to see her smile again!"

Another typical Easter desert is la colomba, named after the form it takes of a dove, the symbol of peace. The dough and consistency is similar to that of the traditional Christmas cake, panettone, made of egg, sugar, yeast and butter; however the difference is that the colomba contains candied fruit instead of raisins like in panettone. La colomba is worked in the form of a dove and covered with granules of sugar and almonds, before it is cooked in the oven and passes a long levitation time. The origins of the colomba date back to the VI century. Recently, the famous Milanese company, Motta, render this desert famous worldwide. The difficulty in the preparation of this desert is found in the long preparation time; therefore it is important to not rush the process, so that it rises perfectly.

Lastly, il casatiello is a country bread from Naples. The word casatiello derives from the word case, which in Neapolitan dialect means "cheese." It is made up of flour, water, yeast, salt and pepper. While kneading the dough, many different cheeses are added, along with salami, cooked ham and pig lard. The dough is then worked in the form of a ring to symbolize Jesus' crown of thorns and four raw eggs with their shell are placed on top of the ring and slightly immersed in the dough.

Il casatiello is cooked in a wood burning oven, just like la pizza napoletana, but a normal oven will do. As in many traditional Italian foods, this country bread has its share of religious symbolism. The rising dough means new life, the shape of the bread represents the crown of thorns and the eggs symbolize rebirth. Il casatiello is enjoyed during the big lunch on Easter day or even brought to the traditional picnic held on the Monday after Easter, Pasquetta.

Each recipe renders all of the 20 regions unique and adds even more beauty to the Italian culture. Happy Easter!

More in this category: « Turin, The Capital of Chocolate Traditional Easter Dishes in Italy »