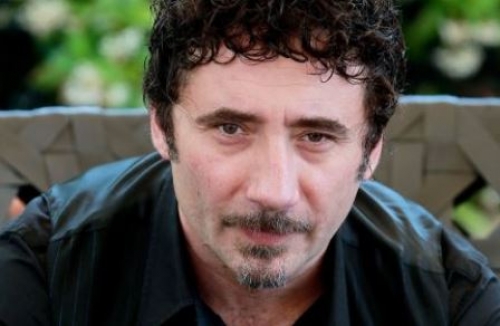 Conventional wisdom states that "natural leaders are born and not made" and that "the world stands aside for those who know where they are going." Singer/songwriter and poly-instrumentalist Federico Zampaglione is the founder and frontman of the Italian pop group Tiromancino, and since its formation in 1989, he remains the lone constant among the myriad of professional musicians who have at one time or another participated in the group's recording and touring activities.

He was born in Rome on June 29, 1968 into a tight-knit family that traces it lineage to the southern region of Calabria. His father, Domenico, is a professor of philosophy and author and his brother, Francesco, is a professional musician who has participated on several of the group's recordings. Federico's musical tastes were influenced by his father who, early on, introduced him to British Blues and American Folk artists. Whether performing in a band setting, as a solo performer or composing songs for his musical colleagues, Federico has gained the following of a modest but loyal fan base as he has dedicated himself to the process of experimenting with new sounds while incorporating visual aesthetics to achieve a complete and pleasant musical experience.

Their debut album "Tiromancyno" (1992) was a limited-run release as only 3,000 copies were produced. The recording displayed random rock rhythms interspersed among electronic dance beats, but was soon out of print as the songs were nondescript and went largely unnoticed by both critics and the public. Undeterred by his failure, Federico effected some personnel changes including the addition of his brother, Francesco, a poly-instrumentalist and bassist/vocalist Laura Arzilli. The immediate effects were subtle but perceptible, as evidenced by their second release "Insisto" (1994). The band displayed a more "cohesive" sound and the recording retained elements of their previous unconventional pop melodies. The now stable lineup energized their live concerts in venues across Rome and nearby provinces in the region of Lazio. These memorable shows translated into increased record sales and highly-coveted exposure through the broadcast outlets.

Italian pop star Luca Carboni chose them as his opening act for his successful "Ci vuole un fisico bestiale Tour 1992." The group gained valuable exposure as they travelled throughout the peninsula and later continued with a European tour as a supporting artist for the rising English pop musical group Morcheeba. These live performances stimulated the band's creative abilities and their next two releases, the last to be recorded in the 90s, revealed a refined and clearly identifiable style of acoustical guitar blended with tasteful electronic sonorities.

Their third album "Alone Alieno" (1995) was very well-received and contained two songs "Amore amaro" and "Conchiglia" which were unreleased singles that, nevertheless, received unexpected radio air-time and have become staples of their current live shows. Their fourth release "Rosa spinto" (1997) demonstrated new funk, soul and rhythm-and-blues sonorities and yielded three popular singles; "Senza cuore," "Bruciare" and "Il punto." Tiromancino had finally achieved the status of touring on their own and the group seized the opportunity to sharpen their musical skills, compose new material and forge new professional relationships. Upon their return to the studio after the new millennium, they signed a new long-term recording contract with Virgin Records and released their breakout recording "La descrizione di un attimo" (2000). The album achieved gold status and featured an important collaboration with fellow Roman musician and rising record producer Riccardo Sinigallia. Among the singles released, the first, "Strade," written and featuring Sinigallia on guest vocals, earned the group their first invitation to the 2000 Sanremo Music Festival where it finished in second place among 18 contestants in the "Sezione Nuove Proposte" (New Artists Category). The next single "Due destini" was included on the soundtrack of the dramatic movie "Le fate ignoranti" (2001) directed by Turkish-Italian screenwriter Ferzan Ãzpetek. The title track received the Rockstar Music Award in 2001 and was featured on the soundtrack of the comedy "My Name Is Tanino" (2001) directed by Paolo Virzì as well as the film documentary "L'erba proibita" (2001).

The success of this recording, however, came at a high price as internal tensions developed forcing Francesco, Laura and Riccardo to sever their relationship with the band due to unresolved professional and creative differences. Despite their departure, Federico continued on with the release of the group's sixth album "In continuo movimento" (2002) which yielded three hit singles. It achieved gold status and was co-produced by Federico with the assistance of Andrea Pesce and Luigi Pulcinelli. The composition "Per me è importante" was the first ever to reach the top position on the charts and remained there for several weeks. "I giorni migliori" and "Nessuna certezza" were the other two singles released; with the latter featuring guest vocals from female pop singers Elisa Toffoli and Meg from 99 Posse.

This same production team would oversee the release of the group's seventh album "Illusioni parallele" (2004). The recording featured collaborations with Manuel Agnelli, the founder of the Italian alternative rock group Afterhours and Argentinian jazz-trumpeter Claudio Corvini. Federico also paid homage to Lucio Dalla by covering his classic ballad "Felicità." The singles released were "Imparare dal vento" and "Amore impossibile;" both of which became hits that enjoyed extended stays on the charts. Tiromancino released their first "Raccolta" (Greatest Hits) entitled "95-05" (2005). The songs "Un tempo piccolo" written by Franco Califano and "Come è profondo il mare" penned by Lucio Dalla were included in this compilation. Federico completed his contract with Virgin Records by releasing his eighth and platinum-selling album "L'alba di domani" (2007). The hits "Angoli di cielo," "Un altro mare" and the title track all featured prominently on the radio and video stations. The album also saw the brief return of his brother, Francesco, to the group as well as contributions from his father Domenico, as he provided the lyrics for the title track and "Poveri uomini."

The tensions again mounted as success and began tearing apart the bonds of family and friendship. Federico chose to move on to the "Deriva" independent music label and enlisted the services of Alessandro Canini to assist him with the production of their first live recording "Il suono dei chilometri" (2008). Two "inediti" (previously unreleased songs) were contained on the album and became instant hits, propelling it to gold status. The songs were "Quasi 40" and "Il rubacuori;" the second of which Tiromancino presented at the 2008 Sanremo Festival as they marked their return to the annual music competition. His last two recordings, "L'essenziale" (2010) and "Indagine su un sentimento" (2014), featured Tiromancino at its finest as stability was restored to the group. Federico ventured into new musical sounds as the first recording yielded three singles and featured a horn section and the latter saw the return of Francesco to the fold in both a musical and creative capacity and was recorded on the Sony Music record label signaling a re-commitment of Federico to his true love of music as a creative art form.

For more information you can visit their website at www.tiromancino.com