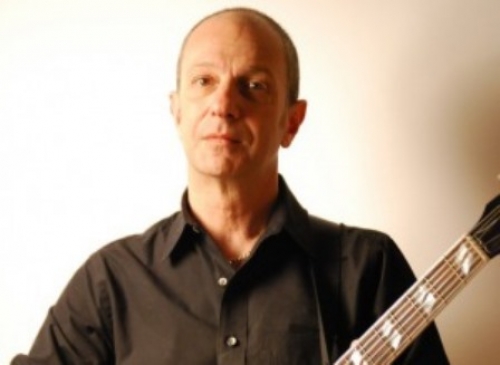 People who choose to enter the professional music business are often warned by their family and friends "Don't quit your day job." A music career, although personally and artistically satisfying, is sometimes fraught with heartbreak and disappointment. The hours can be unexpectedly long and the pay may not be commensurate to the skill level or expectations. It takes tenacity and resolve to remain in this seemingly trying occupation. Although many abandon their dream, some elect to persevere by adapting and evolving in order to succeed.

Roman-born singer/songwriter and musician Sergio Caputo is such an individual. Born on Aug. 1, 1954, he has remained true to his beliefs that talent will overcome adversity and he has an uncanny knack of reappearing on the music scene when least expected. Sergio began writing songs and playing the guitar when he was 13; by age 16 he was performing with schoolmates in pick-up bands all throughout "I Quartieri di Roma" (The Neighborhoods of Rome). He made his way to the legendary Trastevere music venue "Folk Studio" during the 1970s, and, like many other aspiring "baby-boomer" musicians, found a vehicle that allowed him to pursue and cultivate his dreams. He developed a writing style that "fused" pop music melodies with swing and Latin-jazz rhythms; combining them with whimsical yet profound lyrics.

Sergio credits Jimi Hendrix, Muddy Waters and Carlos Santana among his early guitar influences. He released his first single "Libertà dove sei" in 1978, a song which was nothing more than an ordinary ballad featuring basic harmonies and simple guitar accompaniment. To the surprise of many, however, it caught the attention of talent scouts at the Dischi Ricordi music label who offered Sergio his first recording contract. He relocated to Milan, the music center of Italy, and began work on his first album, the self-titled mini-LP, "Sergio Caputo" (1981). The recording, though not a commercial success, paved the way for him to gain valuable studio experience and sharpen his compositional skills. His efforts paid off handsomely as his debut, full-length album, "Un Sabato Italiano" (1983), would become his breakout recording. It was produced on Italian music legend Teddy Reno's CGD (Compagnia Generale del Disco) music label and became an instant commercial success, earning him consensus critical acclaim. The title track and "Bimba se sapessi;" both of which received extensive and unexpected radio air-time, are a staple of his live performances to this day.

He returned to the studio to release his second album, "Italiani mambo" (1984), which was an even bigger seller as the title track and "Vita dromedaria" became big hits. Seeking to expand upon his now-familiar jazz and swing music stylings, Sergio's third album, "No Smoking" (1985), contained new elements of boogie-woogie, blues, samba, and Dixieland sonorities. "L'astronave che arriva" and "Hemingway Caffè Latino" displayed diverse styles but retained similar vocal qualities. His next album, "Effetti personali" (1987), his fourth overall, was another popular recording that continued his fearless experimentation with new sounds and catchy arrangements. The recording featured a guest appearance by American jazz great Dizzy Gillespie, as he provided unmistakable and memorable trumpet solos on the songs "Il pianeta Venere" and "Trio vocale militare."

It became apparent to Sergio that he would need to form a band to accompany him on his busy tour schedule that followed the release of the album which included stops all throughout the Italian peninsula. The highlights from his sold-out performance at the Teatro Orfeo di Milano would be captured on his first live recording "Ne approfitto per fare un po' di musicaâ¦Live" (1987). Sergio received his first invitation to the prestigious Sanremo Music Festival as he presented his samba-flavored composition "Il Garibaldi innamorato," which inexplicably fared poorly at the competition. Nevertheless, Sergio completed his contractual agreement with CGD, which had seen him produce an album per year, with the release of his sixth and seventh albums "Storie di whisky andati" (1988) and "Lontano che vai" (1989). Both recordings continued his bold and avant-garde approach to songwriting and songs such as "Non bevo piu tequila," "Bum!," "Dammi un po di piu," and "Anche i detective piangono" were testament to his compositional skills. Sergio returned to Sanremo in 1989 and presented the song "Rifarsi una vita," but, again, received a lukewarm reception.

The constant grind of composing, recording and touring began to consume him. Seeking a new direction, he signed on with the Fonit Cetra label and released his eighth album "Sogno erotico sbaglaito" (1990) which displayed more acoustically-driven, American-style, rockabilly and country-pop songs. The results were satisfying and left the door open to revisit the American scene at a later time. He returned to CGD for one last time, recording his ninth album entitled "Egomusicocefalo" (1993) and satisfied another longing which was to produce a more rock-oriented, electric-guitar driven release that still exhibited occasional jazz and blues tendencies. Sergio closed out the century by signing on with Mercury records and released two more albums "I Love Jazz" (1996) and "Serenadas" (1998) with the former displaying a straight-forward jazz sound from beginning to end and the latter lavishing old favorites with a distinct and upbeat Latin-American pop-style.

Sergio made his last appearance at Sanremo in 1998 and presented the song "Flamingo" which, as usual, was performed brilliantly, but judged poorly. Sergio desired a more drastic change in his life and profession, so he made the difficult decision to relocate stateside; and, perhaps due to his disillusionment with the music business in general, he founded his own music label called "Idiosyncrasy." Now that he was able to compose, record, and tour at his discretion and while in his new surroundings in California, Sergio's first order of business was to produce his first-ever, instrumental-only jazz recording, "That Kind of Thing" (2005). The results were amazing as it garnered significant air-play on American jazz radio stations and received the SmoothJazz.com award as the most downloaded independent album in 2005 from the prestigious online, independent jazz music portal. After a brief pause, which included getting married to an American women and having children, Sergio released his 13th album, and second overall on his own label, "A tu per tu" (2006). The recording presented an "unplugged" re-interpretation of his earlier favorites and was warmly received by fans, both old and new alike.

After 20 years, Sergio finally released his second live recording "La notte è un pazzo con le mÃªches" (2009) which saw him redo many of his old favorites in a relaxed and intimate club setting, all on his new and current record label "Alcatraz Moon." His most recent recordings "Un sabato Italiano 30" (2014) and "Pop Jazz and Love" (2015) feature a matured artist with the first album being the 30 year anniversary of his breakout debut release, recorded in a jazz key, and the second, his first release of new music in nearly 20 years.

Sergio is currently on tour in Italy and spends time both in California with his family and in Milano while performing live on stage. For more information you can visit his website at www.sergiocaputo.com.