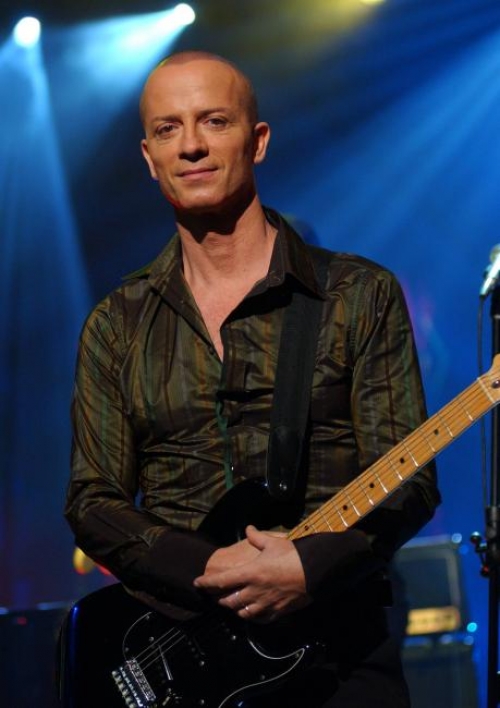 With a career that now spans nearly three decades, Raffaele Riefoli has attained musical success of all kinds at all levels. Better known as "Raf", he was born in Margherita di Savoia, a small town in the southeastern region of Apulia, on September 29, 1959. Like many of today's current Italian pop music stars, he displayed an instinctive fondness for music at an early age and seldom missed out on opportunities to expose himself to a wide variety of music styles. Trained on both the piano and guitar, he combines these skills with remarkable songwriting talents and delivers them with vocal abilities that seem both effortless and graceful.

He moved north to Florence at the age of seventeen to study architecture however his passion for music would eventually lead him even farther north, all the way to London and into the world of music. As with most fledgling musicians, Raf had to take on odd-jobs, working as a waiter and handyman to earn money to pay for living expenses. His first musical experience was a short-lived engagement with the punk-rock group "I Café Caracas", which also featured guitarist Ghigo Renzulli, future guitarist for the popular hard rock band Litfiba. They released a 45-single containing a rock-style cover version of Mina Mazzini's "Tintarella di luna". This recording achieved little success and eventually the two went their separate ways.

After returning to Florence, a chance encounter with legendary Italian producer and lyricist Giancarlo Bigazzi would lead to a productive partnership and serve as the springboard to his musical career. During his time abroad, Raf had compiled an extensive and impressive catalogue of compositions written in English. One of his works, "Self Control" would become his first hit single in 1983 and was made internationally popular by American recording artist Laura Branigan. This song appeared on his first and only all-English album released in 1984 on the CGD music label and also included the hits "Change your mind" and "London Town".

Raf composed the smash hit single "Si può dare di più" which was presented by Gianni Morandi, Enrico Ruggeri and Umberto Tozzi at the 1987 Sanremo Music Festival and captured first place. That same year he performed at the prestigious Eurofestival competition in Belgium with Umberto Tozzi and finished in third place with the song "Gente di mare" singing for the first time in Italian. The following year, in 1988, he released his second album (his first in Italian) "Svegliarsi un anno fa". Critics hailed the recording as "intensely poetic and musical".

Building upon his success, Raf released his third recording "Cosa resteràâ¦" (1989), his first gold-selling release, and he made his second appearance at Sanremo performing the lovely ballad "Cosa resterà degli anni '80. He included this song on the album along with the hit single "Ti pretendo", which captured first place at the Festivalbar music competition later that year. His burgeoning record sales and growing popularity lead to a lengthy international tour throughout Europe and the British Islands.

When he returned to the studio in 1991, Warner Music had purchased his old label CGD and immediately extended his recording contract. Raf put the finishing touches on his fourth recording entitled "Sogniâ¦é tutto quello che c'é" and it yielded two hit singles "Siamo soli nell'immenso vuoto che c'é" and "Oggi un dio non ho; the latter of which he presented at Sanremo, finishing in tenth place. Another song on the album, "Anche tu" featured the collaborative songwriting and vocal talents of fellow up-and-coming pop star, Eros Ramazzotti. Following the lead of numerous other Italian recording artists at that time, he released a Spanish language recording in 1992 called simply "Raf". The album was promoted in Spain and Latin-America and his tour that year included stops in those markets. In 1993, he not only authored the song "Mi rubi l'anima", a duet which was written expressly for Laura Pausini's debut recording; he also provided background vocals. Later that year he recorded his fifth album "Cannibali" and the results were incredible as it was certified six-times platinum. The advance single "Il battito animale" captured first place at the 1993 Festivalbar music competition. The recording later spawned two more hit singles; the lovely ballads, "Due" and "Stai con me".

Raf had risen to the level of superstar status as his performances now filled arenas throughout Europe. His next album "Manifesto" (1995) continued his great success as it yielded four hit singles; "Sei la più bella del mondo", "Il suono c'é", "Dentro ai tuoi occhi" and "Prima che sia giorno". The recording also featured the talents of several noted international guest musicians. Raf released a first greatest hits compilation "Collezione temporanea" which contained sixteen of his best works re-arranged and featured the hit single "Un grande salto". His last recording of the decade "La prova" was a critical success as he experimented with new sonorities, but commercially it was considered a failure and attained only mediocre sales.

Undaunted, Raf returned to his rock roots and his last two recordings on Warner/CGD, "Iperbole" (2001) and "Ouch!" (2004) were both platinum-selling releases containing many hit songs. His second greatest hits compilation "Tutto Raf - Collezione Definitiva" (2005) was a two-CD set that contained 32 songs. Raf signed on with Sony/BMG the next year and his next two recordings "Passeggeri distratti" (2006) and "Metamorfosi" (2008) featured songs with increased focus on social themes and more complex arrangements. His most recent release "Soundview" (2009) is his first-ever live recording which captured the highlights of his February 2009 performance in Milan to over 40,000 spectators during the immensely popular Metamorfosi Tour. For more information you can visit his website at www.raf.it.

Tweet
More in this category: « Alexia (The powerful voice of a petite singer) Nek (A singer with a poetic passion for life and love) »