Alexia (The powerful voice of a petite singer) 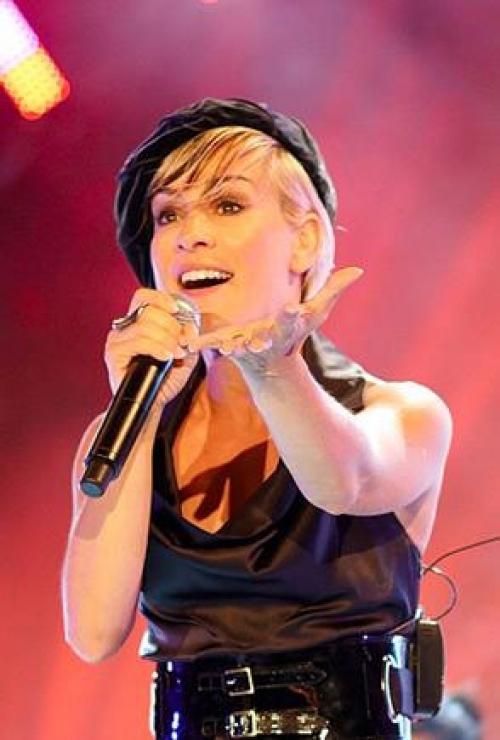 Whoever coined the phrase "big things come in small packages" may have had Alessia Aquilani in mind. Alexia, as she is better known, stands only 150 centimeters (4 feet and 11 inches). Although diminutive in stature, her powerful voice and amazing range command immediate attention while performing. She compliments these vocal skills with a carefully choreographed and graceful dance stage presence, which adds to the high-energy level of her shows.

Alexia was born in the province of La Spezia, located in the northeastern region of Liguria, on May 19, 1967. She is an accomplished singer/songwriter and producer of her own music, much of which is written in English. Her musical styles cover a broad range of genres, including soul, blues, Eurodance, pop and rock. Alexia's remarkable success has led to her being dubbed "La Regina delle Dance" (The Queen of Dance) and her avant-garde approach has continually evolved over time. She also has the distinct honor of being the first Italian female singer to reach #1 on the charts in both Italy and England.

Alexia showed a predisposition to singing while only four years old and began to accumulate numerous awards and accolades. By age seven she had joined her first band called "I Ragazzi di Migliarini", although she would leave shortly thereafter to concentrate on refining her singing skills, studying dance and learning to play the piano. Her first recording contract was signed with DWA (Dance World Attack) Records owned by Roberto Zanetti.

Beginning in 1989, she recorded numerous English language songs which charted well in Europe and were even more successfully promoted to the burgeoning dance market of Japan. She later served as a backing vocalist for British rapper Ian Campbell's group called Ice Mc and the Eurodance vocal group called Double You. This would allow her to accompany these major acts on international tours that made over 300 appearances worldwide.

Alexia chose to pursue a solo career and in August of 1995 her first single "Me and You" reached #1 on the Italian charts. Over the course of the next two years, she released four singles; "Summer is crazy", "Number one", "Uh la la la" and "Gimme love" all of which reached the top position on the charts in both Italy and Spain. During this time her first two full-length albums "Fun Club" (1997) and "The Party" (1998) each sold over a half-million copies. She closed out the millennium with her third recording "Happy" (1999) and began thinking about expanding her career style beyond Eurodance. Her fourth recording, "The Hits" was a greatest hits compilation that was released in 2000 and it was at this point that she chose to terminate her contract with DWA. She opened the new century by signing on with Sony Music and recording her fifth and final English language release called "Mad for Music" (2001). Sales of the recording however were disappointing in comparison to her previous releases. After an exhausting international tour she participated in her seventh Festivalbar Music competition in 2001.

After just six short years and having achieved amazing success she made the bold decision to begin recording in her native language of Italian. Her next release, "Alexia" earned two gold records and was followed up with her first appearance at the 2002 Sanremo Music Festival. Her entry "Dimmi come" surprised everyone by finishing in second place and she was awarded the "Premio Volare Migliore Musica" (Volare Award for Best Music). Alexia returned to Sanremo in 2003 and captured first place with her soulful ballad "Per dire di no". This song was included on her seventh recording "Il cuore a modo mio" which was released shortly thereafter and was followed by a lengthy tour. The album's second single "Egoista" was later released and became an immediate hit. With this recording, Alexia changed her music style, seeking to express herself through powerful and emotional compositions. The album also featured an Italian cover of Aretha Franklin's 1967 hit "I never loved a man". Her eighth album "Gli occhi grandi della luna" (2004) featured Italian versions of songs written by rhythm-and-blues legends Diane Warren "Se te ne vai cosi" and Sam Watters "Come tu mi vuoi". The song "Senza un vincitore" was dedicated to the late Italian cyclist Marco Pantani, whose life was beset by accusations of performance enhancing drugs and who eventually died of a tragic cocaine overdose. She returned to Festivalbar that year for the last time as she presented the song "You need love". Alexia's last recording on the Sony Music label would be her second greatest hits compilation "Da grande" (2005) which contained the previously unreleased title track. She also entered this song into the 2005 Sanremo Festival and captured second place in the female category.

Alexia took some time away from music and was married later that year to Andrea Camerana, nephew to famous Italian fashion designer Giorgio Armani and together they had a daughter, Maria Vittoria who was born in February of 2007. She returned to music scene soon thereafter and her next two recordings "Ale" (2008) and "Stars" (2010) saw a return to her pop, rock and dance roots. For more information you can visit her website at www.alexiaofficial.com.