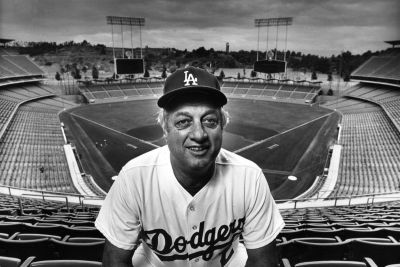 The National Italian American Foundation (NIAF) sends its condolences to the family of Tommy Lasorda who passed away on January 7, 2021 at the age of 93.

As a World Series champion, MLB Hall of Famer and former manager of the Los Angeles Dodgers for 20 years, Mr. Lasorda committed eight decades of his life to the game and will be sorely missed. “We are deeply saddened to hear of the passing of Tommy Lasorda,” said NIAF Chairman Patricia de Stacy Harrison. “He was an exceptional baseball player, coach and manager. He brought joy, courage and energy to the players, to his fans and to all who had the chance to meet him. NIAF honored Mr. Lasorda in 2011 at our Gala in Santa Monica and we enjoyed having him as frequent guest at our Galas over the years, including our 44th Anniversary Gala in Washington, D.C., in 2019.”

Mr. Lasorda was born and raised with four brothers in Norristown, PA. His father, Sabatino, was an Italian immigrant from the region of Abruzzo. His mother was Carmella (Cavuto) Lasorda. A testament to the pride of his Italian American heritage, Mr. Lasorda’s office at Dodger Stadium was lined with photos of Frank Sinatra and stocked with pasta, garlic bread and tomato sauce, according to the New York Times.

At the 44th Anniversary Gala, Lasorda stood at the podium and captivated the 1,200 guests in the ballroom: “We are all here for one purpose. I am proud to be Italian…My father came from Italy and I thought he was the greatest man that God ever put on this Earth…So tonight, sitting here, makes me proud…We Italians, we must be together. We must do everything we can to make this country better, and we Italians can do it.” The baseball legend received a standing ovation at the conclusion of his speech.

Jo Lasorda, Mr. Lasorda’s wife of 70 years, survives him. His other survivors include his daughter, Laura, and a granddaughter. His son,

Tweet
More in this category: « The Thunderous Calabrian On the Cover: St. Joseph's Day »