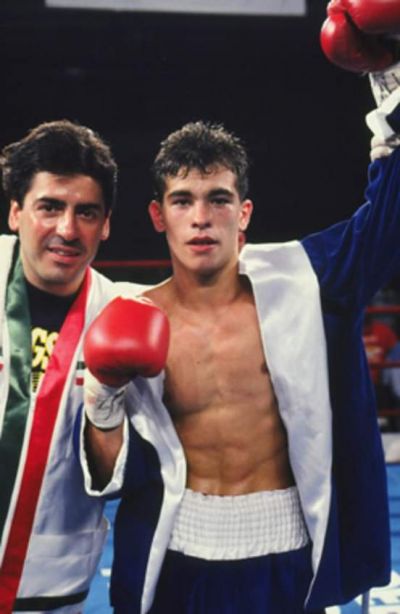 Some boxing fans may wonder what happened to the great Italian American boxers and why they are not pleasing crowds anymore. It is not that Italian Americans have lost interest in becoming prize fighters or have gotten soft.

The decline in Italian American boxers has to do with the fact that Italians are no longer a marginalized class of people, the way they were during the days when infamous Italian American fighters such as Rocky Marciano, Willie Pep, Tony Canzoneri, Carmen Basilio, Rocky Graziano, Jake La Motta, Mike Ballerino, Lou Ambers, and Roland La Starza were in the ring.

Fighters often come from tough environments where they feel the best way to make it out of those communities is to fight their way out. By 1980, there was only one Italian American fighter pleasing crowds; a tough brawler from Ohio named Ray "Boom Boom" Mancini, who retired from the sport in 1992. Vinny "Vinny Paz" Pazienza and Arturo Gatti were the last great Italian American fighters.

Arturo Gatti was born in the Calabrian town of Cassino on April 15, 1972. At age 5, the Gatti family emigrated to Motreal, Quebec, Canada. Growing up in the Little Italy section of Montreal, Gatti developed an interest in soccer, but eventually developed a passion for boxing when he was 14-years-old. At age 15, Gatti relocated to the U.S. where he lived with an uncle of his in Jersey City, NJ. At age 17, he became a professional boxer.

Gatti won his first 6 bouts without much of a fight from his opponents and proved at a young age that he had what it takes to be a world champion. His first professional bout was against Jose Gonzalez on June 10, 1991 in Seacaucus, NJ. He knocked Gonzalez out in the third round.

Gatti held the junior lightweight world title from 1995 to 1998. In 2002, Gatti fought the Irishman Mickey Ward in Connecticut, which was the first fight of a trilogy that is considered the second greatest boxing trilogy of all time. Ward won the first fight in Ward's turf of New England, but Gatti won the second bout on his own turf in New Jersey. Gatti also won the third fight on June 7, 2003, even though he broke his right hand during it.

In 2004, he became the super lightweight champion. The following year, he lost the title to Floyd Mayweather Jr. In 2007, Gatti retired with a record of 40 wins and 9 losses, with 31 wins by knockout.

Sadly and tragically, Gatti was found dead in his hotel suite in Brazil on July 11, 2009. There is a lot of speculation surrounding his death, but his death continues to remain a mystery.

Gatti was inducted to the World Boxing Hall of Fame in 2012. Even though Gatti lived in Canada for a short time period as a youngster, he was a Jersey boy at heart.

Tweet
More in this category: « The Life of Richard Crenna Baseball Legend Tommy Lasorda Passed Away »