On the Cover: St. Joseph's Day 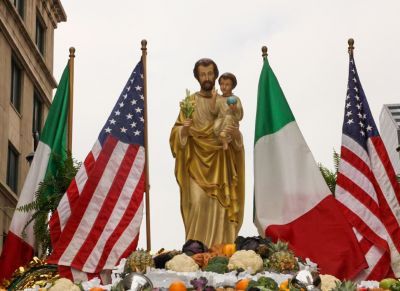 On March 19, many in the Christian world celebrate St. Joseph’s Day, the principal feast day of St. Joseph. Saint Joseph, as we know, was the husband of the Virgin Mary and Jesus’ legal father. While this day is not a holy day of obligation for Catholics in the U.S., it is considered Italy’s Father’s Day.

By the 10th century, St. Joseph’s day was dedicated to several Western calendars and the custom was established in Rome in 1479. Today, many celebrate by wearing red clothing, carrying blessed fava beans, assembling home altars dedicated to the saint, and attending a St. Joseph’s Day parade.

In Sicily, where St. Joseph is regarded by many as their patron saint, thanks are given to San Giuseppe for preventing a famine in Sicily during the Middle Ages. According to legend, there was a severe drought at the time and the people prayed to their patron saint to bring them rain. They promised that if God answered their prayers through Joseph’s intercession, they would prepare a large feast to honor him. The rain came and the people of Sicily prepared an expansive banquet for their patron saint. The fava bean was the crop which saved the population from starvation. Wild fennel and chickpeas were also some of the few plants available to these poor people and thus became important parts of the Sicilian diet and some of the ingredients that go into the unique Pasta di San Giuseppe. Giving food to the needy has become a St. Joseph’s Day custom.

Upon a typical St. Joseph’s Day altar, people place flowers, limes, candles, wine, fava beans, specially prepared cakes, breads and cookies, and zeppole. Foods are typically served containing breadcrumbs to represent saw dust since Joseph was a carpenter. The altar has three tiers to represent the Trinity with a St. Joseph statue at the head. Since March 19 always falls during Lent and is traditionally a day of abstinence, St. Joseph’s tables are covered with meatless dishes.

Italian Americans also honor St. Joseph on March 19. Many Italian American households recreate a St. Joseph’s table and celebrate the saint on this day. New Orleans, in particular, hosts elaborate celebrations in honor of St. Joseph. In the 1800s, New Orleans was a major port of entry for Sicilians immigrating to America. St. Joseph’s Day became a citywide event. Hosted by the American Italian Marching Club, one of the largest ethnic group organizations in the southeast, the annual St. Joseph’s Day Parade in the French Quarter is a local favorite. The evening typically begins with food, wine and Italian music followed by marchers dressed in black tuxedos proceeding to parade until dark. Public and private altars can be found throughout the city. If you happen to see a fresh green branch over a local’s doorway, it means you are invited in to participate in the ceremony and to share the food.

If your family does not have a St. Joseph’s Day tradition, perhaps this is the year to start one!