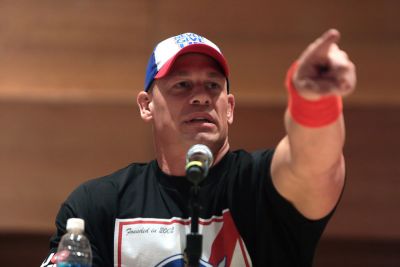 Labeled “the most polarizing professional wrestler ever” by WWE commentator Jim Ross, John Felix Anthony Cena was born on April 23, 1977 to his mother, Carol, and his Italian father, John Cena Sr. In addition to his successful pro-wrestling career, Cena spent a brief period as a rapper, earning him fame within the audience on “Smackdown!” His album “You Can’t See Me” debuted at number 15 on the U.S. Billboard 200 chart. Throughout his WWE career, Cena has won 25 championships with 16 reigns as world champion, an accomplishment only previously achieved by WWE Hall of Famer Ric Flair, in addition to many other titles. Cena has also starred in a list of feature films including “The Marine” (2006) and “Trainwreck” (2015) and made appearances on television shows including “Saturday Night Live” and “Parks and Recreation.” Cena is currently the host of “American Grit” on Fox. But, perhaps, one of Cena’s greatest accomplishments has come during his philanthropic work, namely with the Make-A-Wish Foundation. John Cena has granted the most wishes in Make-A-Wish history.

Tweet
More in this category: « Italian-born Miss USA to Compete for Miss Universe Croatti "Cleaned Up" in the Business »