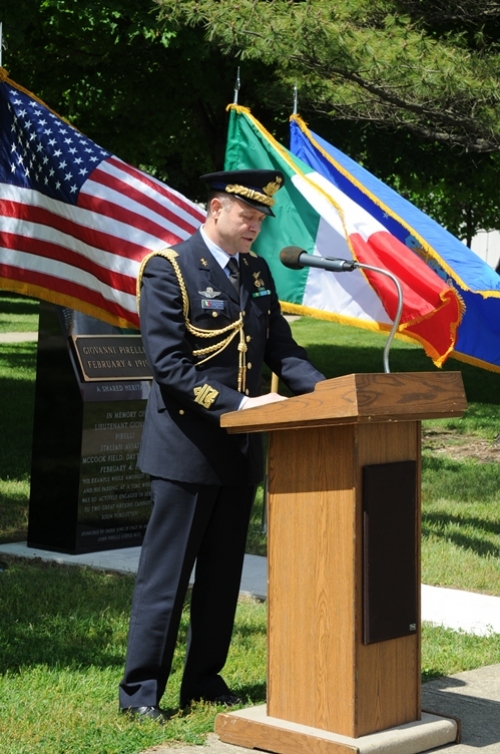 On Thursday, May 10th, members of John Pirelli Lodge #1633 OSIA together with distinguished guests from two countries engaged in a historic dedication and celebration of the life of Italian airman, Lt. Giovanni Pirelli. More than 120 people gathered at the National Museum of the United States Air Force's Memorial Park near Dayton, Ohio, for the dedication ceremony to unveil the new Lt. Giovanni Pirelli Memorial.

During those uncertain weeks immediately following the Armistice of WWI, it was deemed essential by the Allies that experimental and research activities should carry on without interruption until conditions were definitely settled. One result of this action was the establishment of an Italian military mission at McCook Field in Dayton, Ohio in November 1918. As a member of this mission, aviator and test pilot Lt. Giovanni Pirelli was assigned to America as an instructor pilot charged with the task of acquainting the U.S. Air Corps with the progress of Italian aviation and assisting American engineers in aeronautical research and development by sharing with them the benefit of their broad aerial experience.

Lt. Pirelli, the youngest son of the senator and industrialist Giovanni Battista Pirelli, earned his pilot's wings in the early days of World War I. From June 1915 until the end of the campaign, he flew 55 reconnaissance missions and participated in four bombing missions while assigned to the Austrian front.

On February 4, 1919, Lt. Pirelli left McCook Field to conduct a test flight of an Italian-made aircraft built by the Ansaldo Corporation, Genova, Italy. After taking off in a modified A1 Balilla aircraft, he flew toward Wright Field, where his machine suddenly entered a nose-dive and plunged to earth. The day following his death, local Italian-Americans in Dayton assisted in making arrangements to send the body of Lt. Pirelli to his home in Milan. In appreciation, Lt. Pirelli's father sent the local group a check for $1,000, which was used to purchase a lodge hall. Although the original building no longer exists, the local Dayton chapter of the Order Sons of Italy in America, one of the largest in Ohio, is still known today as the Giovanni (John) Pirelli Lodge #1633.

In January 1930 the Pirelli family requested, through the Italian Ambassador to the United States, that a small memorial be placed at the site of Lt. Pirelli's crash. On March 12, 1930, a marker was formally dedicated at the Fairfield Air Depot (currently Area C, Wright-Patterson AFB) in memory of Lt. Pirelli.

In November 1985, the marker, which was located behind Building 152, Area C, was removed for safe keeping due to planned expansion of the Wright-Patterson Field parking apron. The brothers and sisters of the Order Sons of Italy in America, John Pirelli Lodge #1633, believe Lt. Pirelli's service to his country and ours, devotion to duty and ultimate sacrifice clearly illustrates the contributions that many Italians have made to the advancement of aviation within the United States. Therefore, the Lodge undertook a long-term project to find a fitting location to re-dedicate this memorial.

As a result of a request by the members of the Lodge, permission was granted in July 2011 to design and dedicate a new memorial to Lt. Pirelli to be located at the National Museum of the United States Air Force's Memorial Park. The new memorial, which incorporates the original bronze plaque in its design, was dedicated at this special ceremony on May 10, 2012.

After posting of the colors by the WPAFB Honor Guard and playing of the national anthems of both Italy and the United States, the official unveiling of the memorial was done jointly by Lodge President Anthony Lacon and Major General Gabiele Salvestroni.

The memorial that was unveiled displays the words stated by Brig. General B. D. Foulois, 82 years ago, during the initial formal ceremony to honor Lt. Pirelli's sacrifice: "His example while amongst us here and his passing at a time when he was so actively engaged in service to two great nations cannot be soon forgotten."

In his comments, General Salvestroni, a decorated command pilot with more than 2,900 flight hours in more than 50 types of aircraft, said to the crowd that "a shared heritage is the key phrase of today's event; it sends us back to the commonalities between our Countries, made by the blood of our Citizens. The lasting memory of those bonds is still reflected in the friendship and alliance in which we do believe and we are here to celebrate."

Tweet
More in this category: « Dr. Fioritto's wisdom in dentistry J.Crew teams up with Milanese designer »