J.Crew teams up with Milanese designer 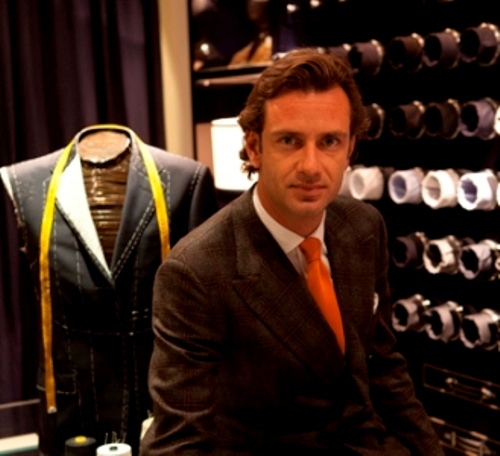 As I flipped through my monthly eye candy, a.k.a. the J.Crew catalog, I couldn't help but notice a familiar name amongst the pages of the men's section. No, I do not shop for men's clothing, but this name hit too close to home for me to pass up and ignore. "Italian Chino From Larusmiani," wait a minute, Laursmiani? THE Larusmiani of Via Montenapoleone in Milan, THE Larusmiani where I spent three years working in the flagship store? Oh yes, it's all true. The renowned Milanese designer that has dressed everyone from Saudi kings to Silvio Berlusconi has teamed up with American J.Crew to bring the best of Made in Italy stateside.

Perhaps some of you are perplexed having never heard of Larusmiani. It's ok, most have not, especially if you've never walked on Via Montenapoleone. But I'm sure you have heard of Ermenegildo Zegna, Tom Ford, Etro and Bellora. You see the design house of Larusmiani started off as a tailoring business in 1922, when Guglielmo Miani migrated to Milan from Puglia. His tailor shop on Via Manzoni immediately became the point of reference for the Milanese and up scale tourists. Miani's specialized in same day custom made raincoats, as Milan during the winter, is a very rainy city. With the birth of the raincoat came his logo, the "larus," which means seagull in Latin. Tailoring for the most esteemed politicians, artists and celebrities, he quickly gained notoriety throughout Milan. Miani expanded his business by opening three other stores in the center of Milan.

By the Post War period, Miani was the first to import VicuÃ±a wool, a very rare and prestigious wool fabric, still today considered to be the noblest fiber in the world. In 1956, he was appointed as an Official of the Italian Republic. Then in 1965, Prince Philip of Edinburgh officially visited one of the shops in Milan, sincerely congratulating Miani for his commercial activity and organization of the Italian-English trade opportunities. In fact, Larusmiani became the largest importer of British textiles in Italy. To acknowledge Miani's importing and sale of the most prestigious fabrics and English garments, on April 8, 1970 he was appointed by the Ambassador of H. M. Queen Elizabeth II of England, as an Officer of the Most Excellent Order of the British Empire.

As time went on, the business expanded into creating highly innovative textiles, mainly based on blending natural fiber such as cotton, linen, silk and cashmere. Today, Larusmiani has become the lead supplier of textiles to the most famous fashion and luxury brands in the world. Simultaneously to the textile development, Larusmiani consolidated all of the shops in Milan into one, mega, lush, flagship store found on the city's most prestigious fashion street, Via Montenapoleone, where they sell everything and anything a man would need. Recently, Larusmiani even introduced a woman's line, catering to the affluent, understated Milanese women.

So when J.Crew added its "Ludlow Shop," (online and in Tribeca) which showcases their perfect-fit suit, they called on Larusmiani to take care of supplying the cotton twills, cashmere and oxford shirting. Good thinking J.Crew, since now the best of Made in Italy is available right at our fingertips and has saved us the plane ride, although, I'd rather take the plane ride.

With the Larusmiani seal of approval, we cannot feel anything but warm and giddy inside, since quality is something Larusmiani is known for. In fact, the vision of the design house goes on with the same ideas and values of its founding fatherâalways looking ahead and always aiming to represent an example of authentic excellence, which can now be found at a J.Crew near you.